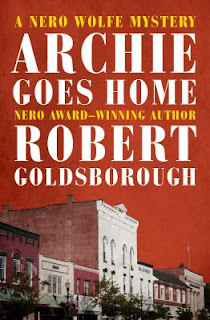 
Archie Goodwin has a lot of experience with crime detection as Nero Wolfe’s indispensable assistant, but this time he’s undertaking an investigation of his own.  Archie’s Aunt Edna calls with suspicions that the suicide of a local banker is murder.  Her suspicions seem to be confirmed when a reporter—let me add here that it is a very pretty female reporter—has a shot fired through her window.   Still, it’s not enough to really interest Archie, but he and Wolfe both know that Aunt Edna is not going to give up but will continue to badger him until he goes.  Besides, she’s made some veiled comments about his mother not being well, probably to guilt him into coming home, and of course it works.  Archie heads off to small town Ohio.

Once there, he finds gossip aplenty about the deceased banker.  The question is, did anyone have a big enough grudge to commit murder?  The local police don’t think so, and don’t care for some slick detective from New York butting in, while the intrepid reporter seems determined to rush in where angels fear to tread.  The fact that this story could be her break through to move on to bigger and better things, maybe even a job at a big city newspaper, definitely factors in.  It’s definitely to her advantage that this turns out to be murder.  But is it?  And if so, who is the culprit?

I am a long-time fan of the original Nero Wolfe books by Rex Stout so when Robert Goldsborough continued the series, I had to check his books out.  I’ll be honest:  some work better than others.  His version of Wolfe especially is “off” to me, but that is a personal feeling.  Others have felt his portrayals were good (and he has gotten support from Stout’s daughter) and a strong continuation of the series.  Still others have disparaged them.  I’m in the middle.

That said, for me this is one of the more successful entries he’s done.  In part I think I like it because Goldsborough has created new characters and put Archie in a different setting.  The plot was good too, which always helps.  I liked the relationship Archie has with his mother, and that she and Wolfe are friendly.  Aunt Edna is another matter, but she’s never so obnoxious that I wanted to close the book. Also, lest someone think this is a Nero Wolfe Mystery without Wolfe, rest assured that the great detective does put in an appearance.

Definitely one of the better of Goldsborough’s interpretations.