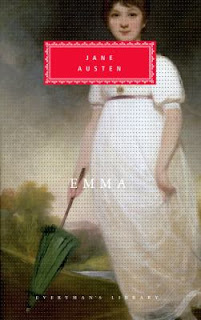 Jane Austen once said of Emma that the novel had a heroine whom she felt no one but herself would like.  I confess that when I started reading it, I tended to agree with her as I found Emma to be too self-centered.  It turned out that we both had a bit of growing to do, and I ended up loving the book.  Naturally, I then had to check out some of the filmed versions of the book so I could be disappointed.

I have to say, though, I haven’t been disappointed in any so far.  True, none quite came up to the book but I find that with most film adaptations—with a few exceptions, of course.  (I’m looking at you, Jaws.) 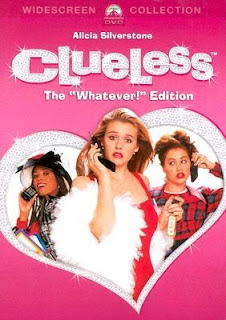 I started with “Clueless” because I didn’t expect a lot.  I ended up being pleasantly surprised at how much of the original made it into this updated version about the spoiled daughter of a high-powered lawyer who decides to match-make for the new kid in school.  While Alicia Silverstone’s Cher may not have had the exquisitely precise manner of upper class Emma, she certainly knew her way around social situations and couldn’t resist the opportunity to play Svengali. The result is a funny, charming movie that features a very young Paul Rudd and the excellent character actors Dan Hedaya and Wallace Shawn as Emma’s father and her teacher, respectively. I especially liked the way the relationship between Emma and her father was reimagined in this one:  they are still very close, Emma is still protective, and Dad is so proud when daughter argues her way to a better grade. 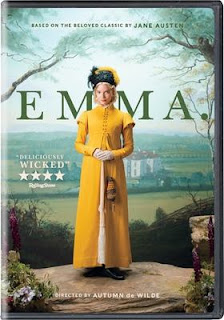 The 2020 version, “Emma.” has a period after the title to indicate that it is a “period piece.” I think of it as a good “Emma” for those who haven’t read the book and that’s not a put-down.  Bright, flashy, energetic,  and with good bits of social information woven into the dialog, its intention is to fill in needed information for the viewer unfamiliar with book or time period.  The movie moves at a good pace and is a visual treat.  The costumes are incredible.  Emma herself is played by Anya Taylor-Joy and may be the closest I’ve seen to the book Emma.  While solicitous of her father, this Emma is definitely spoiled and entitled and while at the end she becomes aware of some of her more egregious behavior, there is no astounding transformation as in some adaptations.  Bill Nighy makes for an interesting Mr. Woodhouse.  He has the quirkiness and there are some fun visual statements (Mr. Woodhouse fears drafts and at one point he is all but invisible behind a phalanx of screens), but he seems more lively than I would have expected.  Johnny Flynn as Mr. Knightley is okay; there wasn’t anything objectionable, but I didn’t find much to be memorable, either. I quite liked Josh O’Connor as the ambitious Mr. Elton too.  The whole movie seemed to be just slightly exaggerated—not enough to annoy, but in a spirit of fun.  Again, I think the idea was to appeal to an audience who might not have read the book—those who have are pretty much guaranteed to watch it.  I like this one because I think it’s one that would encourage people who haven’t read the book to pick it up. 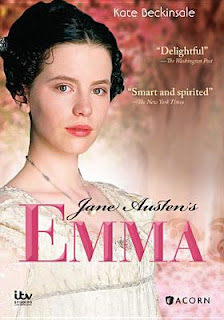 The 1996 version with Kate Beckinsale and Mark Strong was another good entry.  This one has a dark-haired Emma instead of the more usual blonde.  There were a lot of solid performances, but for me the standout was Raymond Coulthard as Frank Churchill.  This is the only one I have seen in which Frank is a genuinely appealing character and I could understand why the other characters were charmed by him.  In most of the other versions, I’ve failed to see the attraction. 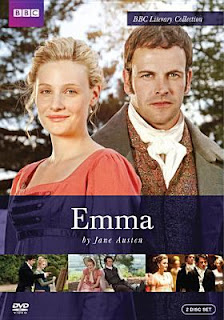 Last but not least, there is the 2009 miniseries version with Ramola Garai as Emma.  For the purist, this one has the advantage of time:  it doesn’t have to cram the richness of the book into a two hour space.  I’m sure that’s one reason I like it so much, but there are some excellent performances as well.  Michael Gambon is to my mind a perfect Mr. Woodhouse, always worried about digestion, drafts, accidents, and any disturbance of routine.  Garai is a good Emma; she plays the role as a bit younger and a tad more innocent than some of the others, but just as willful and, on occasion, thoughtless.  Blake Ritson is well cast as Mr. Elton.  The real coup in this one is Jonny Lee Miller as Mr. Knightley, who fits my image of the character to a T.  He pulls off the exasperation and fondness toward Emma in a way none of the others really manage.  He is an actor whom I’ve watched and enjoyed as Sherlock Holmes in the modern series and as both Victor Frankenstein and The Creature in the stage version of “Frankenstein” (thanks, Fathom and Tinseltown!) but he wasn’t a “must see” actor. In this, he excels.

The Gwyneth Paltrow version isn’t reviewed here simply because the library didn’t have a copy.  No editorial comment is implied.

The verdict? Not a bad one in the bunch.  For re-watching, I’d opt for the 2020 version because it is so pretty or for the 2009 mini-series because Jonny Lee is so pretty. Your mileage may vary.