Out of Body by Jeffrey Ford 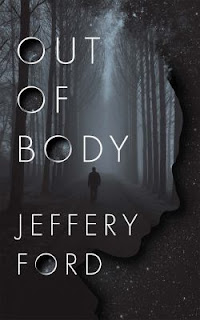 Owen is the head (and only) librarian of a small town library which will soon be closed as will the other small town libraries, all gathered into one central library in a larger place.  He’s resigned to the fact, but equally determined to serve his community as best he can for as long as he can.  The library’s Sleeping Beauty mural, a point of pride and nostalgia, is fading and cracking, just like everything else and Owen feels helpless to fix it.  Then Owen’s life of quiet desperation takes a shocking turn when he witnesses a violent act.

Deeply upset by what he witnessed, Owen’s sleep disturbances return.  He suffers from sleep paralysis, a horrible sensation in which he feels fully conscious but cannot move his body.  It was terrifying then and is terrifying now. . . and all at once,  something changes.

Instead of being trapped inside his body, Owen has the sensation of leaving his body.  He can wander the town in the night, mostly unseen except for the occasional dog or perceptive child who seems to realize that there is someone out there.  It seems almost as if he is alone until he meets another sleeper who explains that while having these OBE (Out of Body Experience) is exhilarating, there is danger lurking in the night:  creatures who hunt for sleepers and will sever the link back to their bodies. Together they begin to explore and discover an old horror lurking in their midst:  something dark and dangerous that threatens not only sleepers but the whole town.

I am not much of a horror reader any more, but when the leaves start to turn and there’s a chill in the air I find myself wanting to read something a little unsettling.  While the same could be said of most of 2020, I wanted something fictional so when Out of Body was ready to go on the shelf, I decided to take a look.  When I realized the hero was a librarian, I was sold.

I have to say there is a lot packed into these 163 pages but I never felt rushed.  The author lingered at times, setting the mood and stage.  I especially enjoyed the scenes where Owen roamed at night, seeing what people are doing, almost like a spirit peeking in at the world of the living.  There is tension and horror, though I felt it was handled well. There are some graphic descriptions but the author doesn’t wallow in them. He also skipped long explanations and speculations about sleepers and I was fine with that.  Oh, sure, Owen and I had some questions, but I have to say it was nice to have a book with a story to tell that got down to business.  Sometimes I feel an author is just padding the book, and that was not the case here. I would have enjoyed getting to know some of the characters a bit more, but overall I was quite satisfied.