The Mall by Megan McCafferty 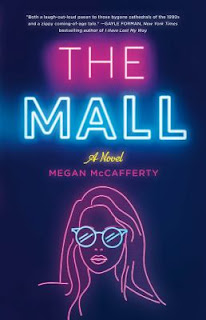 It’s 1991, and Cassie has finally gotten over her bout with mono. She has already missed the end of her senior year (including prom!) and the beginning of her summer job at America’s Best Cookie Company in the mall. But it’s ok. Cassie and her boyfriend still have The Plan: while away the summer in the air-conditioned mall while saving their money for their big move to New York City in the fall. But on her first day back to work, Cassie discovers that her boyfriend hasn’t exactly been lonely while she was recovering from her illness. No way is Cassie going to spend the summer working in the same food court as a liar and a cheat.
Desperate for a new, and hopefully cooler, job, Cassie spends her days applying to various shops in the hopes that someone will give her chance. She’s finally taken in as a temporary bookkeeper for a chic boutique where her former best friend Drea just so happens to work too. The chilliness between them begins to thaw when Drea recruits Cassie in helping her find a legendary hidden treasure somewhere in the mall.
Yes, this is a silly premise but that’s exactly why it’s so enjoyable. The stakes are low, and the bangs are high. The book felt very episodic with Cassie lurching from one dramatic incident to the next but all the while, it still feels like a chill, “hang out” book. As a reader, you are just hanging out with these characters and getting to know them at the local mall. Mall culture of the 1990s obviously plays a big part in the story, and it is fun to read about Orange Julius and Sam Goody among others. McCafferty is best known for her Jessica Darling young adult series from the early 2000s. Though I never read those, I can see why she’s popular. Her writing is fun, and it pops.
Despite the book’s fluffiness, Cassie does have a nice little character arc. She is snooty and selfish at times but she’s self-aware and tries to work on her flaws. I had a lot of fun with this book; it’s a nice palate cleanser if you’ve been reading a lot of heavy stuff lately. And the treasure hunting adds a splash of adventure! This book was pretty much what I’d hoped it would be, and I’m so glad I got a chance to read it.
** I received an advanced copy of this book from Netgalley in exchange for an honest review. **
Posted by BPL Ref at 10:30 AM