The Magic of Marie Laveau: Embracing the Spiritual Legacy of the Voodoo Queen of New Orleans by Denise Alvarado 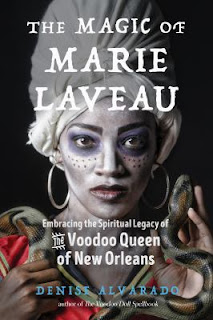 Marie Laveau is a near mythic figure in New Orleans. Her name appears in songs, in stories, and even in movies as a mysterious woman of power and magic.  Did she really exist? If so, who was she?

Alvarado, a Creole scholar and Voudou practitioner, examines the historical records and comes up with answers.  She traces what is known about the life of the real Laveau, and offers informed speculation in places.  For example, there were actually two women known as Marie Laveau; most believe that one of her daughters took her place after her death, but she had several daughters.

Laveau was born in 1801 in New Orleans, a free woman of color.  Her husband, Jacques Paris, was a free man of color, but after his death in 1820 she became the domestic partner of a Frenchman, Dominick Duminy de Glapion (depending on the record, the spelling varies). Only two of her fifteen children lived to adulthood, both daughters; and in following French Catholic tradition, both had the first name of Marie.

More interesting to me was the discussion of the history of voodoo/voudou/voodun.  With roots in Africa, there are several variations; arguably the best known are Haitian voodoo and the New Orleans/Louisiana.  Laveau was a staunch Catholic, and melded Catholic practices and beliefs into her brand of voodoo. In some cases certain saints seem to be identified with African counterparts, reminding me of the way that the Romans adapted local religions into their own belief system.

I appreciated the way that Alvarado addressed other researchers and reports in her book. Insofar as possible, she used original records and the earliest reports available to try to form a picture of Laveau, including sometimes sensational newspaper accounts.  She looked for the earliest possible accounts, including material gathered by Zora Neale Hurston who was an anthropologist and folklorist as well as an author. I liked the way that Alvarado acknowledged others’ work in the field, even when she disagreed with their conclusions.

The book has a wonderful bibliography at the end, giving a wealth of sources for an interested reader to check.

However, the history of Laveau takes up only part of the book.  The rest is devoted to describing how to set up an altar and how to perform various rites and rituals.  She informs readers that if they have trouble acquiring some of the ingredients to contact her through her website and also refers them to her other books, which are more about the practice and less about the history.

My quibbles with the book include the lack of an index and a glossary.  Alvarado seems to assume the reader already has some knowledge of the religion and sometimes introduces terms without a thorough explanation.  She will also use alternate spellings for the same concept, depending on which version of the religion is being referenced (Haitian, New Orleans, African) which I found confusing.  And I must admit I still don’t have a clear understanding of some of the differences, especially how Laveau voudou differs from New Orleans.  I also kept getting confused as to which spelling went with which version (voodoo/voudou/voodun) and the difference between Voodoo and Hoodoo. The fault is probably with me; I felt it would have helped if I could have referred back to a particular section at times but without an index that proved a bit time consuming.

If you are looking for a non-sensational, well researched treatment about the life and faith of Marie Laveau, this would be a good choice.
Posted by BPL Ref at 10:30 AM