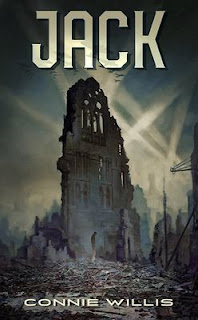 Set in London during the Blitz, this novella is told from the point of view of Jack Harker, a member of the air raid rescue squad.  He and his fellow recruits are tasked with searching for survivors under the rubble left after the bombs, and to watch for incendiary devices and douse the fires.  They’re a ragtag group, headed by the strong-willed Miss Lucy.  They’re joined by a new volunteer, also named Jack.  He doesn’t quite fit in with the others, keeping to himself, not socializing with the others, and not even sharing food.  He is, however, superb at locating survivors.

As the war takes its toll, Harker begins to be suspicious of the other Jack.  He has a mysterious day job that is apparently so important that he leaves even in the middle of a search and is vague about his origins.  Is he a spy—or something else?

This 1991 novella has just been reissued in a standalone volume.  At only 108 pages, Willis manages to pack a lot into a small space.  Having read and enjoyed a number of her other works, I was looking forward to this one and I was not disappointed. . . except that  another review I read gave away some things I would rather have not known beforehand.  Hence, my very brief description above.  Willis has used the London Blitz as a backdrop for several of her books and stories (Blackout and All Clear, two parts of one story, are especial favorites) and she seems to know the terrain.  As with all of her work, I was left with things to ponder. A memorable tale well told.