Romance Novel Round Up: Foster, Morgan, and Van Dyken 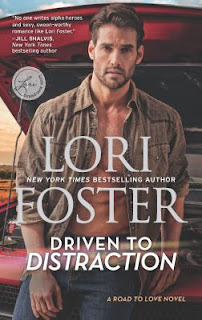 Time again for a romance novel round up:  new romance novels to make you fall in love again—or gag from the saccharine sweetness.  I found this batch of romance novels on Tennessee READS simply by good fortune or, in the case of Sarah Morgan, purely by accident when I found their work in an ebook bundle.

In Driven to Distraction by Lori Foster, Mary Daniels is a professional in all aspects of her life.  She acquires rare artifacts and unusual collectibles for her obscenely wealthy boss, and she keeps her private life as far away from her public persona as possible.  But when she’s forced to hire a new driver as courier, she meets Brodie Crews, a seemingly rough and rowdy playboy, and she finds her professionalism—and her heart—is put to the test.

I’ve never read anything by Lori Foster, but I’ve seen her name pop up quite a bit and I thought it was time I dived into some of her work.  (That, and I’m a sucker for books with muscle cars.)  Driven to Distraction is the first book in Foster’s “Road to Love” series, which recently published in November 2018.  Although it’s just the start of the series, it’s a pretty great book.  I really liked Mary, because she’s feisty, strong, and not about to take anyone’s crap—least of all Brodie’s; moreover, I really liked Brodie, because he’s unexpectedly insightful and, as it turns out, he’s a big ol’ marshmallow.

Some Kind of Wonderful by Sarah Morgan recounts the story of Brittany Forrest, an archaeologist homebound after an injury, and Zachary Flynn, a daredevil pilot who has come back to his roots to help his foster father.  Brittany and Zach were married when they were only eighteen—and then their marriage went up in smoke after only ten days.  Now, a decade later, they’re reconnecting and discovering that time doesn’t heal all wounds.

I found Some Kind of Wonderful rolled up with The Ladies Man by Susan Mallery and, after losing interest in Mallery’s novel, I decided to give Morgan’s story a shot.  I really enjoyed reading Some Kind of Wonderful.  It’s not your typical boy-meets-girl romance; rather, boy-meets-girl and then they divorce and reconnect much later.  Their relationship is complicated and painful and, occasionally, embarrassing, but the rekindling of their romance is believable and, I think, paced very well.  Their rediscovery of each other feels genuine and sweet.

I’ll admit, it has a bit of a sappy conclusion, but I enjoyed it immensely and I may or may not have squealed with delight.  It’s the first novel I’ve read by Sarah Morgan, and I can’t wait to find more.

In The Wager by Rachel Van Dyken, Char Lynn, a disgraced TV reporter, and Jake Titus, a playboy billionaire of the first order, reconnect—and not in a good way.  Char and Jake share a best friend, and they’re both included in the wedding, which makes everything horrible and awkward, especially since Char and Jake already have a not-so-good history together.

I finished reading The Wager, but I really didn’t like it as much as I hoped.  I liked Jake’s nutty grandmother and I liked the hijinks that ensue when Grandma Nadine conspires to get Jake and Char together, but I just really did not like Jake.  The book has some good parts (i.e. Grandma Nadine); however, I just couldn’t get past the general feelings of meh I had for Jake.  He’s rich, he’s entitled, and he has a chip on his shoulder.  He changes too quickly for the changes to feel believable, and he’s just not very likable at the beginning or the middle or, dare I say it, the end.

Overall, I felt very ambivalent about the entire book.  I think I just don’t like novels with snotty, entitled billionaires as the male lead.  Money can’t buy happiness—and it can’t make me like you when you’re a horrible character.
Posted by BPL Ref at 10:01 AM