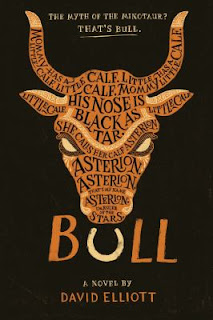 As we all keep saying, we love book bingo! It encourages us to read a bit more widely.  This time around, I had a square for “Read a Book Based on Mythology”—in fact, I picked that sheet especially because I had been wanting to read Joanne Harris’ The Testament of Loki, which is the follow up to The Gospel of Loki, a book I thoroughly enjoyed.

Slight problem: Testament was checked out and not due until after bingo was over.

This sent me to the card catalog in search of another book with a mythological theme, which is where I came across Bull by David Elliott.  It’s a retelling of the story of the Minotaur done in verse.  After regarding it dubiously for a minute or two, I decided to give it a try.

At first I was a little put off by the voice of Poseidon, the God of the Sea, whose first line is “Whaddup, bitches?” But I persevered, and was rewarded with what turned out to be a gem of a book.  While Poseidon speaks in modern slang, it only serves to highlight his contempt for mortals and his harsh judgments.  He doesn’t forgive and he certainly doesn’t forget. A god of mercy, he ain’t.

Each character in the story, from Daedalus to Ariadne and even Asterion the Minotaur speaks in a distinct voice.  In the afterword, Elliott explains how he chose different poetic forms in order to reflect character, modifying them as required. The result is unexpectedly moving in places, but Poseidon keeps the action moving along with his acerbic commentary.

Like Good Masters! Sweet Ladies, this is a memorable little book I would never have picked up on my own. It’s a quick read—less than an hour, certainly, and that was with me pausing to read some sections aloud, just to hear them—but it packs a punch. I’ll never think of the Minotaur in quite the same way from now on.

(And a new round of Book Bingo will be starting soon! Watch our Facebook Page for more information!)
Posted by BPL Ref at 12:53 PM