Death and a Pot of Chowder by Cornelia Kidd 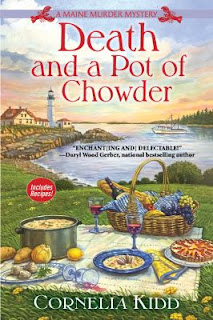 Anna Winslow is happy in her life on Quarry Island as wife to Burt and mother to teenager Jake, though money is always tight. Her world is rocked when she is contacted by a woman claiming to be her half-sister, with news that her father has died and left her something in his will.  Before the two women have more than a chance to meet each other, news arrives that Burt's brother’s boat has been found adrift.  The search reveals Carl’s body—and that he was shot.

There are more shocks to follow, and while Anna stands firm in what she believes she knows about those she loves, it’s beginning to look as if the murderer has to be someone close to the family.

Cornelia Kidd is a pseudonym for Lea Wait, a cozy author whose books I have enjoyed for years. I have to say that this book quickly became a favorite.  I read a LOT of cozies, and after a while there is a feeling of “been there, read that” to many of them.  Anna Winslow seemed like a fresh character to me, a real person.  She was content in her life. Her love of Quarry Island comes through strongly, a place where life can be harsh and unforgiving but also beautiful.  The Islanders are a tight-knit group.  When everyone knows that at some time there will be a need to call on a neighbor for help, you have to be.

Izzie Jordan, the unknown half-sister, is a surprise as well.  Half Korean, she grew up with the father Anna never knew. She’s excited at the idea of having a sister, and sees Quarry Island with wide-eyed wonder, having grown up in Connecticut.  She pushes Anna into doing some investigating on their own when the police seem to feel that Carl’s murder came at the hands of a relative.  They aren’t so much trying to solve the murder as to find evidence to cast doubt on the police’s theory.

If you are a cozy connoisseur, you should give Death and a Pot of Chowder a try.  I thought it was scrumptious.
Posted by BPL Ref at 9:31 AM