My Cat’s Not Fat, He’s Just Big-Boned by Nicole Hollander 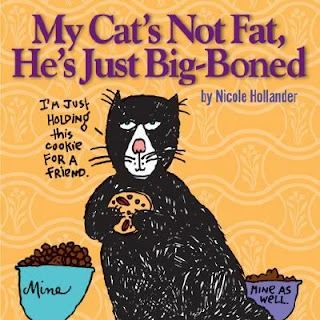 I have a fat cat.  His name is Todd, and he is a BIG BOY. So naturally I had to pick up a book entitled My Cat’s Not Fat, He’s Just Big-Boned.

Nicole Hollander is a comic artist who really knows her cats.  She had the syndicated cartoon strip Sylvia published in over eighty newspapers over the course of thirty years, ending in 2012.  Sylvia’s cats are very involved in her life, usually with their own goals in mind.  Don’t cats always have their own agendas?  Mine do.  They usually want food, a sunny spot to sleep, behind-the-ear scratches, and don’t forget:  a clean litter box.

Holland thoughtfully provides Sylvia’s cats with speech bubbles and a lot of one-on-one attention.  Her cats are also extremely talented, often holding up tag-team signs with written answers to her musings.  “Cats who hypnotize their owners” is a recurring bit in the comic collection.  In response to “Could you help me stop drinking so much coffee?” the cat thinks:  “You will sleep now, and when you wake, you will want to bring fresh flowers into the house every day, and when I destroy them, you will find it cute.”

In addition to being pudgy, my Todd is also a very tall cat.  This book really spoke to me, because I could argue that Todd is both fat and big-boned.  When Todd first adopted us ten years ago this summer, he was a tiny little scrap of an abandoned kitten.  His eyes were barely open so he was probably about one week old. We bottle-fed him, taught him how to go potty, and ended up with a seventeen-pound cat who thinks he is a human and that the humans are his furniture.

You can find this collection in the young adult section of the library.  If you’re amused by comics, browse through our 741.5 section and you’ll find a variety of fat cats (excuse me, that’s big-boned cats) such as Garfield and Heathcliff alongside superheroes and Japanese manga.