Come Along with Me by Shirley Jackson 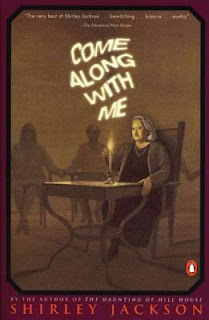 Reviewed by Christy
Shirley Jackson is mostly known for her work in horror – the novels The Haunting of Hill House and We Have Always Lived in the Castle, as well as her infamous short story “The Lottery”. But she’s also written quite a bit of domestic fiction, none of which I had previously read. When I picked up Jackson’s short story collection Come Along with Me, I was still in the horror mindset so at first, I was left a little confused. But the best way to read her short stories is to completely wipe your mind of preconceived notions before starting a new one.
There are a couple of stories that are unsettling but not particularly scary. “The Summer People” is about a married city couple who stays in the country side every summer and leaves around Labor Day. But one summer they decide to stay a little later than normal not realizing that maybe the summer town operates a little differently in the off season.
My favorites of the collection all happened to be simple, domestic fiction. “A Day in the Jungle” is about a longsuffering wife who finally finds the courage to leave her husband. She spends the day at a local hotel, enjoying the luxury of free time and answering to no one. But she’s been ignoring the twinge of fear in her stomach, and it very slowly begins to creep in. It’s a heartbreaking, relatable story, and I loved it.
I also enjoyed “Louisa, Please Come Home” about a nineteen year old young lady who runs away from home. The story “Pajama Party”, about an eleven year old who is permitted to have a slumber party for her birthday, is very cute and charming.
“The Lottery” is also included as well as Jackson’s essay “Biography of a Story” which details the reaction to “The Lottery” after it was first printed in The New Yorker in 1948. Jackson received countless letters from around the world, most of them negative, much to her surprise. In the essay, she reprints the occasional remarks included in the letters. My favorite is from Canada: “My only comment is what the hell?”
I don’t normally read short story collections but I picked this up for the BPL Bingo reading challenge. Come Along with Me is an enjoyable read, and I think it shows Jackson’s range very well.

Comments from Jeanne:
I also read and enjoyed Come Along with Me, but I would like to note that the title story is the first part of a novel which Jackson began but never finished.  I knew that before I started the story but was still disappointed--I was quite curious as to how the rest of the tale unwound but alas! we'll never know.  Also a couple of the selections I recognized from Jackson's two books about domestic life:  Raising Demons and Life Among the Savages.  These two books are utterly delightful and extremely funny. I highly recommend them as well.
Posted by BPL Ref at 9:06 AM