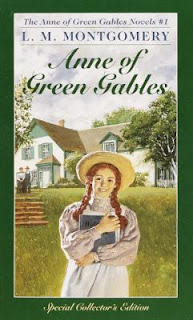 It’s confession time:  I had never read any of the books about Anne Shirley, despite a stint as a children’s librarian and having people recommend the book over and over. It had lingered on my To Be Read list for years until BPL Book Bingo came to my rescue. I needed to read a book written before 1925, and Anne of Green Gables fit the bill nicely.

As the book opens, Matthew and Marilla, a brother and sister who have a farm on Prince Edward Island, are awaiting the arrival of a young boy from the orphan asylum whom they will care for and who will help Matthew with the farm.  To their surprise, their “boy” orphan turns out to be a red-headed girl with an enormous imagination and ebullient spirit.  After some disagreement—Matthew is enchanted with the lively Anne Shirley, Marilla much less so—they agree to keep the child.

What follows is a delightful tale of a young girl growing up near the turn of the century in a rural village in Canada.  Anne is given to dreaming and spinning romantic tales in her head, about which she chatters almost non-stop, charming readers as she charmed Matthew.  But Anne is no Pollyanna; while she has a strong tendency to look on the bright side, she also has a temper which gets her into trouble more than once.  Her flights of fancy and passionate imaginings tend to involve her friends as well, leading to unpleasant moments with unhappy parents but also a great deal of mirth for the reader.

A city child, Anne is enraptured by nature.  She gives fanciful names to trees and ponds, describing them in such romantic terms that even practical Marilla finds herself viewing the world anew.  She loves books and learning, and is trying very hard to be a good and obedient child but there are just so many ways to get into trouble without meaning to!

To be honest, I had expected the book to feel dated and perhaps stodgy, but I found it to be charming and fresh.  In some ways, it’s a more lyrical version of Laura Ingalls Wilder’s stories, with less hardship, but perfectly capturing the emotions of a young girl and her peers.  The story follows from the age of ten until college, with sequels that will take her through marriage and into the lives of her own children.   I see why people fall in love with the books and plan trips to Canada.  I wouldn’t mind a visit myself.

If you’re looking for an upbeat, funny, sweet, and –okay—a bit sentimental tale, look no farther.  I think you’ll be bewitched and bedazzled by Anne Shirley as well.
Posted by BPL Ref at 11:37 AM