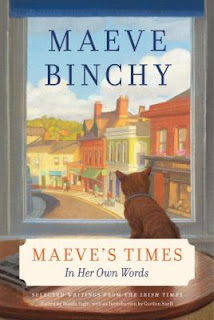 While she was known for her best-selling novels, Maeve Binchy was also a long time newspaper columnist for The Irish Times.  This book collects some of her best columns on a variety of topics, from various Royal weddings to the controversy over contraception.  What each piece has in common is Ms. Binchy’s sharp and incisive take on a situation, often funny, and always thoughtful.

The book is divided by decades, starting in the 1960s and continuing through the 2000s.  No matter when the piece was written, the high standard of writing is always there.  Beautifully rendered character sketches that read like magnificent short stories are more plentiful in the early chapters—and really, each one could have been expanded to novel length, so rich are they—while as the decades go on the pieces are more personal observations and amusing stories.

Make that ”very amusing stories.”  One particular favorite comes in a remembrance of working with a brilliant food columnist when Maeve herself was a bit challenged in the kitchen.  Unable to find a suitable photo of a certain casserole, Maeve substituted a photo of what she thought was a pot of stew with ladles.  It most certainly was not. More than one sent me into fits of giggles that left me unable to explain to anyone what was so funny. And while I think anyone would enjoy her essays, women will most appreciate “Fit for a Queen” in which Maeve indulges in having a bra made by the same establishment that produces undergarments for Queen Elizabeth.

Other selections reflect on Margaret Thatcher,  Maeve’s beloved Ireland, and various members of the Royal family—usually in the context of what the public expects of them, not personal comments as such—and visiting foreign countries.  I was ready to pack my bags.

Most of all, the book painted a portrait of a vibrant, delightful, warm lady who enjoyed life and an avid people watcher (and listener, having claimed to have nearly fallen off a chair while trying to eavesdrop on a nearby couple).  I’m glad to have made her acquaintance, if only in print.
Posted by BPL Ref at 9:07 AM