Steven Cooper Mysteries: The Psychic and the Cop

Steven Cooper is an award-winning journalist who also writes fiction, in this case, mysteries. 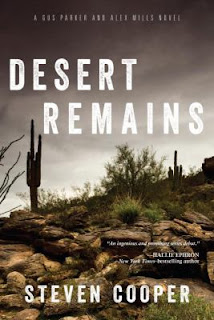 Desert Remains. Women are dying in the Phoenix area, their bodies left in caves near hiking trails, at first. The killer leaves few clues. Their jewelry remains with the bodies; it is not stolen. Victim identification is handy; not stolen, either. And the killer leaves a signature of sorts – a carved depiction of the murder, his or her own pictograph of the event.

Whereas Alex’s role in murder investigations often draws him into the spotlight, Gus prefers to remain anonymous. His work as a medical imager sometimes involves long hours but he has found time to work as a psychic in many U.S. cities, plus London, Dublin, Prague, and Riyadh. That work is both lucrative and tiring. Now as he catches the news after work, sharing dinner with his elderly fellow psychic Beatrice, he listens to a report of the latest gruesome find and gets a vibe, one which he needs to share with Mills.

This is a complex tale with details about Alex’s family life and its impact on his work, Gus’s work with Beatrice to “out” fraudulent psychics, information about desert pictographs, other workers in the police department and their history, and a folk rock singer named Billie Welch, who truly has star status.

Gus is in “at the kill”, so to speak, meaning he is present at the final scene, as is Mills, just a bit later. These two likable and very human characters deal with life and death on a daily basis, and yet retain their sanity, human kindness, and the capacity to love. And Gus’s anonymity may have taken a hit. 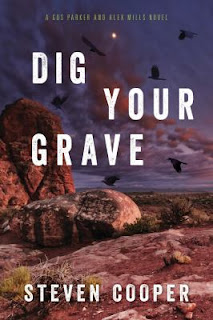 Dig Your Grave. Alex Mills and Gus Parker are back. Alex’s teenaged son is out of trouble for selling drugs (a subplot in the first novel,) but manages to find new trouble to provide another subplot. Gus and superstar Billie are now an item, sharing time, space, and experiences. Superstars can attract stalkers, yielding another subplot. And murders continue to take place in the Phoenix area, but in this volume the victims are male.

Bodies are being found in crudely dug, shallow graves in cemeteries; there is dirt under the victims’ fingernails, indicating they might have been forced to dig by hand.  The first victim carries no identification, but is found to be a corporate CEO. The second is a plastic surgeon. Victim number three is a travel agent. After receiving an urgent phone call, each abruptly departed and was not seen alive again. The victims are well-to-do and approximately the same age.

A seemingly unrelated story involves the 25th anniversary of the disappearance and presumed death of an area college student while she was on a spring break trip to Mexico. Gus is having visions of someone falling from a hotel balcony. But when, where, and why is he seeing this? What is he supposed to do?

Sharing more details could well force me into the spoiler role. I do not want to do that. These books are well-crafted and well worth reading.  I am ready for the third, which will probably appear in 2019. To more mysteries with good detective-psychic collaborations!
Posted by BPL Ref at 6:40 AM