Shelved Under Murder by Victoria Gilbert 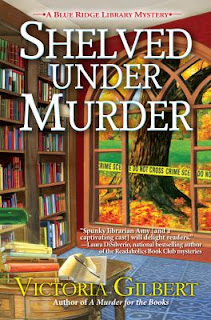 Moving back to Taylorsville, Virginia after a broken relationship, Amy Webber is (mostly) enjoying her job as director of the local public library.  The upcoming yard sale to benefit the library is stressful, and made more so by the demands of a board member, but the promised donation of a painting or two by a well-known local artist gives Amy hope that the sale will be a success.  Plans are derailed when the artist is found murdered, stabbed with her own palette knife.  Things get more complicated when some forged paintings are discovered at the artist’s studio, and Amy is once again drawn into a murder investigation that may have personal implications:  her late uncle may also have been involved in the forgeries.

The second entry in the Blue Ridge Library Mystery series reunites readers with the close knit characters introduced in A Murder for the Books.  As with the first, this is a charming, cozy read with food, friends, and sleuthing.  Amy’s background in Art History is put to good use and fans are treated to the growing romance between Amy and her neighbor.  I particularly enjoyed the art aspect of the story:  I like for my cozies to impart a little information along with the entertainment.  Unlike many cozies, Gilbert’s two books have featured action packed endings and this one did particularly well in that department for me. I also liked the way dubious characters from the first book are explored more fully this time.  Character development is one thing I look for in a successful series, and Gilbert seems to be prepared to plumb the depths. She isn’t afraid to shake things up a bit, either.

However, if you plan to read the first book in the series, you’ll find the author has pretty much spoiled that mystery for you in this book.  Names are named and motives are described.  However, if you read just for the fun of the characters, you’ll have a good time even knowing whodunit.

I’ll be interested in seeing what she does in the next book, and am especially curious to see what becomes of a couple of the supporting characters.
Posted by BPL Ref at 9:08 AM