How to Live in Space: Everything You Need to Know for the Not-So-Distant Future by Colin Stuart 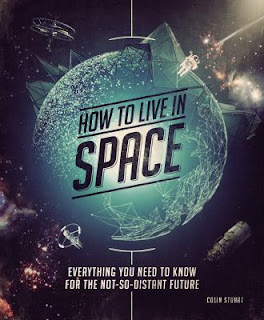 My first concept that people might be able to live in space came from television—no, not from the moon landing—but from the cartoon family called the Jetsons.  (Does anyone else hear The Jetsons’ theme song in their head right now?)  I realized that we weren’t there yet, and also that we didn’t have a robot dog or a robot maid, but it was a very appealing thought that we might be able to expand our horizons and live somewhere beyond this earth.  I even attended Gus Grissom Elementary School, so I saw pictures of astronauts every day, and knew that one day we would be living among the stars.

Flash forward to 2018 and I’m still living on the ground.

But there is hope!  Note the subtitle: “Everything You Need to Know for the Not-So-Distant Future.”  Colin Stuart thinks that humans should keep looking upward and exploring our planetary limitations.  He begins with astronaut training, what it’s like to live in space, and moves upward and outward with space tourism and what future space exploration may include.  With private industry getting into the game alongside nation-states, Stuart notes that living in space might actually be a reality in the centuries, or perhaps decades, to come.

Fortunately we have Stuart to help us prepare as he covers everything from flight control to personal grooming, giving us a glimpse of what space living may entail.  Did you know that on the International Space Station, dirty laundry and other more delicate human waste products are ejected into space in a module which is then sent into orbit to eventually burn up as it falls into the atmosphere?  Yes, that last “shooting star” that you observed may have been something else entirely:  it may have been astronaut poop.

Stuart spins his tale in a believable manner, sketching out a clear path as to how humans soon may be living beyond our wildest dreams.  Science fiction may turn to science reality as technology advances at warp speed.  Remember, it’s been a mere 57 years since Soviet cosmonaut Yuri Gagarin became the first human to leave the atmosphere and make a complete orbit around Earth.  Other advances may allow our descendants to set up housekeeping on Mars or to build the real Starship Enterprise.

As for me, I’m still waiting on that robot housekeeper to clean up after me and my not-so-robot cats.  I’ll definitely name her Rosie and I’ll appreciate her more than the Jetsons ever did.
Posted by BPL Ref at 8:57 AM

Email ThisBlogThis!Share to TwitterShare to FacebookShare to Pinterest
Labels: Colin Stuart, future, How To Live in Space, Humans, Kristin, Space