My Brother's Husband by Gengoroh Tagame 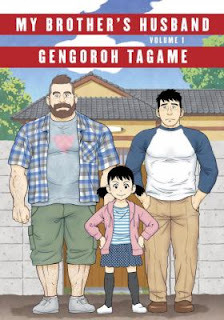 Yaichi is a divorced, single father who spends his days working from home and looking after his precocious daughter, Kana.  His days are mostly the same:  Make breakfast, bundle Kana off to school, work on chores, run some errands, and so on.  But when Mike Flanagan, an affable Canadian who claims to be the widower of Yaichi’s estranged twin brother, Ryoji, arrives on their doorstep, Yaichi’s life will be turned upside down as he welcomes Mike into his home and, moreover, comes to terms with his brother’s death.

I actually selected My Brother’s Husband by Gengoroh Tagame, because I needed to read it for part of the Book Riot “Reader Harder Challenge.”  It ticked off several boxes on my challenge sheet:  a translated book written by and/or translated by a woman; a book of manga; and a comic by an LGBTQIA creator.  (Three down, twenty-one more to go!)

Starting out, I wasn’t sure what to expect with My Brother’s Husband.  I typically read action-y manga, like Fullmetal Alchemist, Ruroni Kenshin, InuYasha, or One Punch Man, so My Brother’s Husband was a pretty big departure from my usual fare.  It builds slowly and focuses on relationships, on changes within those relationships, on intrapersonal exploration.  It’s a very sweet, slightly melancholic drama that focuses on Yaichi’s personal growth as his preconceived notions about homosexuality—and, of course, his brother—are challenged.

It’s very interesting to see how Yaichi grows as a character, how he learns to understand and accept Mike and, in turn, accept his estranged brother.  It’s also intriguing to see how Kana, his daughter, immediately accepts her big Canadian uncle, to see how Yaichi seems to take her lead a little and still manages to make it a teachable moment.  He’s helping her see and understand, while also learning how to do it himself.  Honestly, I found it heartwarming.

Although the story is threaded with tragedy—after all, Yaichi and Mike only meet because of the death of Ryoji—I enjoyed it overall.  It’s not an easy book to read, in that it does bring up uncomfortable questions; likewise, it’s very different culturally, which can make it difficult to understand.  However, it touches upon universal themes of love and loss, acceptance and growth that make it incredibly appealing.

I highly recommend it for manga fans who are in the market for something a little lighter, a little mellower, and a little different.
Posted by BPL Ref at 9:32 AM