We Sold Our Souls by Grady Hendrix 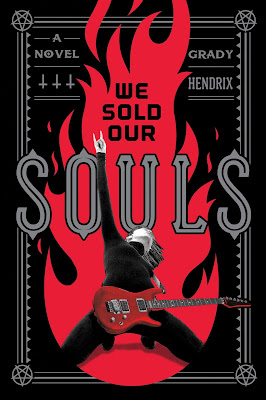 Reviewed by Christy
Kris has always loved heavy metal. So much so that as a teen, she taught herself to play guitar and started a band that would go on to be mildly successful before crashing and burning in the late 90s. Now she’s in her late 40s, working a dead end job as the night receptionist at a Best Western. She hasn’t touched a guitar in years. The rest of her former bandmates are mostly living quiet, normal lives as well. Except for Terry. Terry broke out into super stardom on his own, climbing to success with the stolen music from his former band.

When Kris sees a billboard for Terry’s Farewell Tour, she summons the courage to visit her old friends in an attempt to convince them to confront Terry with her. To say it does not go well is a huge understatement.

As the title suggests, Hendrix’s new novel plays with the Deal with the Devil trope which is always fun. Though I’m no fan of heavy metal, We Sold Our Souls could be read as a love letter to music in general (except nu metal). Even Dolly Parton gets a loving mention!

Though the characterizations are inconsistent at times (sometimes Kris is ok with killing, sometimes she’s not. Terry lets her on stage a little too easily after all they’ve been through), I really enjoyed this novel. It’s essentially an epic road trip book with Kris trying to get to Vegas in time for Terry’s big rock festival.

Hendrix books never take themselves too seriously but it’s obvious that the author has great respect for his subjects which I really appreciate. I also liked that our protagonist is a middle aged woman who bonds on the road with a Latina metal fan named Melanie. Melanie plays a small but important role in the story as well.

This book is a lot of fun – filled with pop culture references and genuinely scary moments. I think heavy metal fans would probably enjoy it even more than I did.

**I received an ARC ebook of this title from Netgalley. It didn’t affect my review.**