Record of a Spaceborn Few (Wayfarer Series) by Becky Chambers 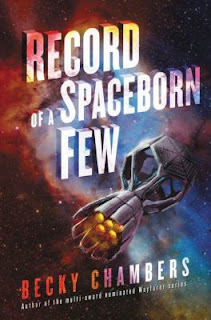 Humankind left a dying Earth centuries ago on the Exodus Fleet, and now often live and die on alien worlds, as well as the space in between.  Having learned lessons from the greed which desecrated the Earth, the Fleet became a well-balanced community with living space and jobs for anyone who wishes to live and work in harmony with others.  Other species are out there in the Galactic Commons:  Aeluons, Harmigians, Aandrisks, and many more yet unknown.  These more space-experienced species helped the humans by sharing technology and knowledge.

This third entry in the Wayfarers series is all about journeys.  Some are geographical, and some are spiritual.  All demonstrate the resilience of the human spirit as people explore far beyond their home world.  Record of a Spaceborn Few is strongly character driven, and although the characters’ timelines occasionally bump into another, their stories are not necessarily dependent upon each other.

Archivist Isabel helps to maintain the records of the lives of those in the Fleet.  She is a keeper of stories, one who builds a history of those who have gone before.  She has dedicated her life to service in celebrating births, marriages, and deaths.  When she is tasked with hosting Ghuh’loloan Mok Chutp, an alien with an amorphous body, Isabel has to step outside her comfort zone during this cultural exchange.

Eyas is a Caretaker.  In space, all matter must be recycled and reused, and that includes human remains.  Caretakers are revered as they respectfully turn remains into fertile mulch which will continue the circle of life.  But who cares for the caretakers?  If it’s hard for Eyas find the kind of friend willing to drop by a neighborhood bar for a glass of mek, how can she find a partner ready to fill her more, ahem, primal needs?

Sawyer was born on the planet Mushtullo.  With no family ties to his home world, this young man decides to try something new—maybe there is a place for him in the Fleet.  Hired on by a crew of shipwreck scavengers, he might finally find a home, or perhaps more danger than he can handle.

Kip is a sixteen-year-old doing what teenagers do—pushing their limits and trying to find their way in life.  He’s not exactly excited about his internship in salvage, and classes are b-o-r-i-n-g.  When a friend suggests modifying their records (the equivalent of getting a fake ID) and going to a club filled with more adult pleasures, the temptation is more than Kip can resist.

Tessa is the character connecting Record of a Spaceborn Few to the earlier books in the series.  She is sister to Ashby, the Wayfarer captain who is still roaming the stars.  Working in salvage and caring for her family keeps Tessa busy within the Fleet.  Her husband George works far afield, leaving Tessa at home with precocious daughter Aya, toddler son Ky, and an extremely stubborn aging father.

There are just a few of the characters wandering the universe of Becky Chambers’ imagination.  In the Wayfarer series, she has created a universe of new possibilities as humanity continues to expand their presence across the stars.

The review of the first book in the series, A Long Way to a Small, Angry Planet, can be read here.
Posted by BPL Ref at 10:26 AM