The Bengal Identity by Eileen Watkins 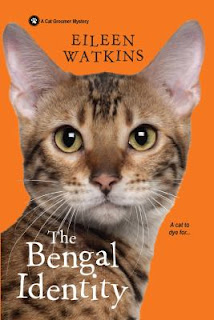 Cassie McGlone, whom we first met in The Persian Always Meows Twice, has a thriving cat grooming/boarding business, thanks in part to all the publicity after her involvement in solving a murder. Still, she’s a bit surprised when a young man from out of the area turns up with a cat he needs to board because of a house fire.

Things get even more puzzling when she tries to clean the cat up to remove a residue: it appears the cat has been deliberately dyed to conceal its identity.  It appears to be a Bengal, a relatively rare and valuable breed, and given the circumstances, Cassie has to wonder if it’s been stolen.   She isn’t going get answers from the man who dropped off the cat, however: he’s the victim of an apparent hit and run.

It soon becomes clear that someone wants the cat – and wants it badly enough to kill for it.

Don’t let the cover with the wide eyed cat fool you: this is not just a sweet little curl up with a cup of tea and some freshly baked scones sort of book. (Not that there’s anything wrong with that, mind, as I do read more than my share of those!) Sure, there’s a bit of rocky romance as Cassie and handsome veterinarian Mark test the dating waters, and there’s some small town ambiance, but the book is more in the mode of a traditional mystery, with dangerous and desperate people. There’s a touch of grit under that veneer.

The plot is fresh and quite well done; there’s no obvious line up of suspects, but there are clues. Also, the police are competent; Cassie is able to help because of her specialized knowledge of cats, not because she’s a secret super-sleuth. She isn’t trying to investigate the hit and run, other than to offer what she remembers about the young man and what she discovers while she’s searching for the cat’s origin. I know that some consider the “heroine/hero must help because cops have targeted the wrong suspect” to be almost a feature of the amateur sleuth cozy, but when it’s too heavy handed I find it annoying.  There is the exciting showdown at the end feature, of course.

Watkins also has the knack of taking a subject that is topical but not making it read like a “torn from the headlines” sort of thing.  I admire the way she uses her books to raise awareness of problems in modern pet culture; the topics are things that are somewhat well known among pet rescues and breeders, but possibly not on the radar of the general public.  The fact that Watkins can do this in an entertaining way is a bonus. (I apologize for being vague, but I don’t want to take the chance of giving away anything that would compromise another’s enjoyment.)

You don’t need to have read the first one to enjoy this one, and you don't have to be a cat lover, but I will say that cat lovers will really enjoy the descriptions of the very active cat’s antics. Watkins knows her cats.

I have really enjoyed this series and am anxious for the next book, Feral Attraction, due out in September.
Posted by BPL Ref at 11:49 AM