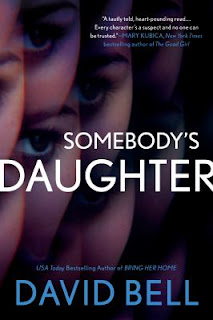 I like this book. Well-written, suspenseful, and generally believable, it offers unexpected twists and turns that can sidetrack the reader. I read it over one very busy weekend, stealing every possible minute to read, including while waiting in the dentist’s chair.

This tightly structured book begins at 8:16 p.m. Michael Frazier and his wife Angela are relaxing at home on a Tuesday evening, when the doorbell rings insistently. Michael answers to find Erica, the first wife he divorced ten years earlier, standing on the porch saying her daughter Felicity has been kidnapped, and she needs help. Erica has called the police in the neighboring town where she lives, but is impatient with their progress. She finally persuades Michael to help her by insisting that Felicity is his daughter. She shows him a photograph that she assures him resembles his late sister Robyn, who died at the age of 6. Erica acknowledges she has mentioned Robyn to manipulate him into helping her. But if there is any chance this is his child, he must help. Beyond that, a child is missing.

The entire plot unfolds in just over twelve hours, from the knock on the door until a resolution that is unsettling in some ways. The book is divided into three sections, Part One - Evening, Part Two – Night, and an Epilogue, dated 6 weeks later. The purist in me kept searching for Morning, a section that should have been there as the story ends at 9:14 a.m. Along the way, there are 2 car crashes, the unraveling of numerous lies and family secrets, all promoting the feeling that no one can be trusted. Revisiting the kidnapping of another family’s infant 10 years earlier plus the discovery of a suicidal child pornographer serve as plot distractions that feel like seeds for other novels.

I do hope David Bell writes those other novels. I am going to the stacks to search for his earlier 7 books. The works of truly good writers are not to be missed, after all.