When the Lights Go Out by Mary Kubica 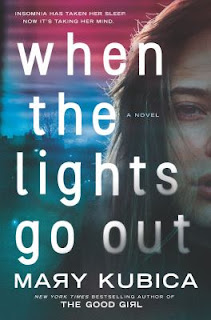 Jessie Sloane and her mother Eden have only had each other.  While they don’t fit the mold of a traditional nuclear family, it works for them, and it’s not that unusual for children to grow up with a single mother these days anyway.  When Eden is diagnosed with cancer, Jessie faces losing her mother when she is barely out of her teens.  In her last days, Eden encourages Jessie to stretch her boundaries, to try new things, and to find herself.

In her mind-numbing grief, Jessie attempts to rebuild her life alone without her mother.  Her sorrow is compounded by an inability to sleep, and Jessie’s days and nights blur together as she finds more questions about the mother she thought she knew.  When Jessie applies for financial aid to attend a local college, a discrepancy with her social security number leads to even more questions about the life she and her mother had together.

Mary Kubica skillfully weaves together Eden’s 20-years-earlier story of her marriage to Aaron and their desperate attempts to conceive a child alongside Jessie’s present day quest to uncover her past.  Jessie’s insomnia makes her actions appear disjointed and nonsensical at times as the narrative reveals decisions she makes in an attempt to move on with her life.  As the story progresses, the tension rises to a fever pitch that had me fearing for Jessie’s life.

I had never read any of Kubica’s work before, but will definitely be seeking out her earlier titles:  The Good Girl, Pretty Baby, Don’t You Cry, and Every Last Lie.  She has published a psychological thriller every year since 2014 and is showing no signs of slowing down.  Kubica definitely kept me guessing and turning pages late into the night and I look forward to her other novels of suspense.
Posted by BPL Ref at 9:54 AM