The Seven Husbands of Evelyn Hugo by Taylor Jenkins Reid 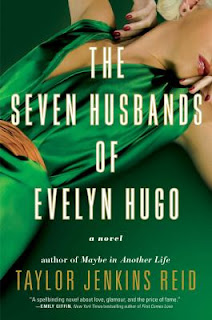 Evelyn Hugo, born Evelyn Herrera, is a star of the highest order. Coming of age in the 1950s and shining the brightest in the 60s and 70s; she is A list Hollywood royalty. She fought ruthlessly for that position, and she had to make seemingly unbearable sacrifices. But in her later years, she has become a bit of a recluse. Holed up in her glamorous New York City apartment, she lives a quiet life of philanthropy. It isn’t until her daughter dies of breast cancer that Evelyn makes the news again: she is auctioning off some of her most notable gowns with all the proceeds going to breast cancer research. She also wants Monique Grant to do a feature on her for Vivant magazine. No one is more surprised than Monique that anyone, let alone an Old Hollywood idol, would specifically request her to do an interview. Monique is a talented writer but still low man on the totem pole.
When Monique arrives to interview Evelyn, she discovers that this is no ordinary interview. Evelyn isn’t just going to talk about the upcoming auction. She is going to tell Monique everything about her life, her loves, and her secrets. Everything. And she wants Monique to turn it into a bestselling tell-all. Flabbergasted, Monique can’t make sense of this proposition. It would completely transform her life and give her the career she’s always wanted. But why her?
I absolutely loved this novel. When Evelyn tells her story, it is completely immersive.  Although Evelyn is a fictional character (though loosely inspired by Elizabeth Taylor and Ava Gardner), it was easy to forget that I wasn’t reading about real people. Many behind-the-scenes stories of Hollywood then, and now, have shown what kind of situations actors learn to navigate – whether it be lascivious producers or the iron fist control of the studios. Evelyn does things that are unpleasant to witness, and she does them without shame or regret.
The story is divided into sections, by husband. And while Evelyn did love a few of her husbands, her marriages were mostly business deals. Her true love was someone she could not love publicly. It was heartbreaking to see Evelyn forced to hide her love (and suppress her Cuban heritage) but she simply saw it as a matter of fact. I wasn’t as interested in Monique’s side of the story or why Evelyn chose her but those parts are relatively small in comparison.
I picked up this book after seeing a lot of hype for it by book reviewers on YouTube, otherwise I’m not sure I would’ve bothered. I have to say, I think it lives up to the hype. Evelyn isn’t always likeable. She does some truly heinous things to get power and then to keep it. But she is captivating, and I loved every second of her story.
Posted by BPL Ref at 9:36 AM