Tune In: The Beatles – All These Years, Vol. 1 by Mark Lewisohn 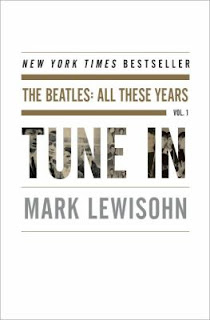 Mark Lewisohn is not just a casual music fan who decided to write a book about the Beatles.  He is known as the world authority on the group, perhaps the best Beatles historian of this, or any age.  It is no wonder that this first volume of a planned trilogy weighs in at over 900 pages, including about 100 pages of notes, credits, and an index.  Although a tremendous undertaking just to read the book, I believe it is well worth the time of any Beatles fan.  Exhaustively researched (the first volume took Lewisohn almost a decade,) Tune In utilizes thousands of primary documents and hundreds of new interviews to tell the story of how the Beatles came to be.

Tune In begins in January 1958, when 17-year-old John Lennon invited 15-year-old Paul McCartney to join the Quarry Men, the musical group that John had begun in 1956-57.  This first volume spans the era through December 1962, the point when the Beatles were beginning to be known to the wider music world.  Lewisohn discusses the inclusion of Pete Best, George Harrison, Stuart Sutcliffe, Ringo Starr, and a few other musicians who played in some version of the group which would come to be known as the Beatles, meticulously noting how and when friends and acquaintances were added and/or removed from the group.  Manager Brian Epstein and producer George Martin’s significant influences are considered as well.

From a couple of teenage boys playing around on their guitars, to the single Love Me Do making a splash by hitting the charts in the fall of 1962 and peaking at number seventeen, Tune In examines those early years.  Playing clubs in Liverpool and Hamburg, Germany honed their skills, and much text is dedicated to the breadth of their live experience before being awarded recording contracts.  Lewisohn delves into the influence that musicians such as Little Richard, Buddy Holly, and Elvis had on the Beatles, as well as other societal influences of the post-World War II era.

Published in 2013, Tune In is a comprehensive telling of the Beatles early years.  It was an easy “read” for me as I listened to the audiobook version.  I was entertained for 43+ hours over the last few weeks as I drove, fixed dinner, etc.  This is one of those “driveway stories,” where I just couldn’t quite bring myself to turn off the book even though I had arrived home.  After finishing the audio version, I checked out the print version from the library as there are quite a few interesting photographs.  The author does not have a definite date for the publication of the next volume; I am anxiously awaiting that information.  Although the story is of all those years ago, the Beatles still hold our attention and our hearts, and Lewisohn is a master storyteller who should not be missed.
Posted by BPL Ref at 9:29 AM