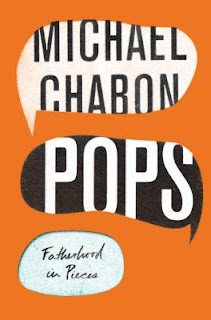 While driving home one evening, I happened to catch an interview with Michael Chabon talking about taking his twelve year old son to Paris Men’s Fashion Week. The young man is passionate about fashion, following his favorite designers, and has quite the eye for materials and color.  His proud but also somewhat bemused father soon tired of one show after another, but his son’s interest never flagged.

I was so intrigued by the interview that I picked his new book of essays, Pops:  Fatherhood in Pieces, which had the Fashion Week essay as well as several others on the themes of parenting and what it means to be a man.  In the introduction, Chabon tells the story about the Great Author who told him that if he wanted to be novelist, he could never be a parent. He quoted Richard Yates as saying that you lose a book for every child.

Chabon took this piece of advice for what it was worth and is now the father of four children, all of whom make appearances in this collection. Each child is treated with respect as an individual; they aren’t there to be jokes but to reveal to Chabon some aspect of himself and his expectations.  One son seems about to follow Chabon into a love of baseball, but the actual Little League play turns out to be a bit much—just as Chabon himself had discovered at an early age.

Another essay is primarily concerned with Chabon’s own father, a physician who was known for his bedside manner but, arguably, not his ability to connect with his own family.

While this book is brief, I found it to be enjoyable and thoughtful.  Chabon’s stories flow, his insights are sharp, and his use of language is lovely.  He also has a lively sense of humor, including about himself.

I think most people would be charmed by Pops.
Posted by BPL Ref at 9:46 AM