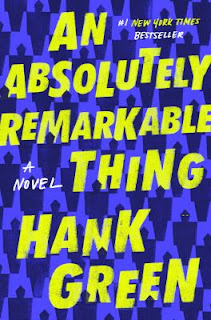 Hank Green’s debut novel, An Absolutely Remarkable Thing, is a science-fiction comedic fantasy of epic proportions.  Meet April May, the twenty-something narrator who works crazy long hours at a graphic design job she hates just so that she can fulfill the artist’s dream of immersing herself in the creative culture that is New York City.  One night (well, technically at 2:45 am) while leaving work, April sees something that changes her life:  a ten foot tall robot sculpture dressed in samurai armor.  On a whim, she calls her friend art school friend Andy Skampt and tells him to bring a video camera.

“Hello!  I’m April May, and I’m here at 23rd and Lexington with an
unannounced and peculiar visitor….”

A few minutes of recording (deciding to name the robot Carl,) a little editing, an upload to YouTube, and suddenly April and Andy have a viral video with more than a million views overnight.  But the thing is, Carl isn’t some avant garde art installation.  No one knows how he arrived in the middle of Manhattan across from the Gramercy Theatre.  Carl is an international mystery, and April has unintentionally scooped all the other news outlets in the world.  People can’t stop talking about New York Carl.  Or Beijing Carl.  Or Mumbai Carl.  Or Hong Kong Carl.  Or the other 60 Carls who have suddenly materialized in major metropolitan areas around the world.

While the Carls form a major framework for the plot, the strength of this story lies in the characters.  April May is complex, and while she may not admit her feelings to her friends/family/lovers, she is self-aware and honest with herself throughout her narrative.  Dealing with sudden cyber-fame and constant interactions on social media, April learns much about herself.  Being thrust into the public spotlight, April’s personal relationships begin to change and she must decide her priorities in this Carl business, and indeed, in her life.

Hank Green became internet-famous as the creator of the YouTube channel VlogBrothers, with his brother John Green, already a best-selling author of young adult fiction.  The brothers’ creativity also extends to the brilliant fast-paced educational YouTube videos Crash Course and SciShow.  Trust me—we used Crash Course as supplementary material in homeschooling, and anything that can engage a teenager with the War of 1812 is worth watching!

Hank and John Green also promote positive self-image to young adults, having created a culture where it is okay to be different, and where the underdog often ends up as the hero figure.  Not many middle aged male authors seem to be able to voice a young woman protagonist, but both Greens have taken on the challenge and excelled in their tasks.  Their online followers often claim the name of Nerdfighters, with the goal to come together and do awesome things.  DFTBA, or “Don’t Forget to Be Awesome” is a common exhortation.

I look forward to seeing more from Hank Green.  With a debut like this absolutely remarkable book, he likely has his readers hanging on the edge of their seats for his next installation.
Posted by BPL Ref at 11:07 AM