Murder in the 11th House by Mitchell Scott Lewis 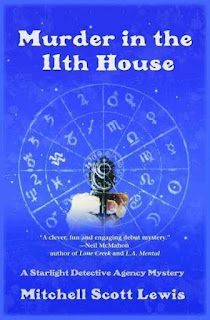 Reviewed by Jeanne
Sometimes I pick up a book because it has an intriguing title, like I Still Miss My Man, But My Aim Is Getting Better.  Sometimes it’s because I’ve heard so much about an author.  Sometimes it’s because of the exotic locale.  Sometimes it’s because there’s a cat on the cover.
This time it was because the premise sounded so good:  a detective who solves cases based on astrological charts.  Oh, I’d read the occasional tea leaf mystery or ghostly intervention but this one seemed to be a relatively serious book done by a professional astrologer --and one who specializes in economic astrology at that.
David Lowell is an extremely wealthy man who earned his money by investing according to the stars.  He has a network of experts to handle most situations, a car with an amazing sensory component, and strong opinions on things from politics to the proper way to drink beer. He’s also a martial arts enthusiast.  Lowell’s  lawyer daughter, Melinda, calls on her father to help her out with a difficult case.  She has a client accused of murdering a judge.  Jonny is a bartender with a chip on her shoulder and an abrasive manner which doesn’t endear her to a lot of people.  It certainly didn’t endear her to the judge, and Jonny responded with a widely reported threat.  Even though there’s a lot of circumstantial evidence, Melinda feels Jonny is innocent.  She just needs some way to prove it, and she thinks her father’s unorthodox methods might be just the way to do it.
If you think astrology is a lot of hooey, then this won’t be a book you’ll enjoy in the least.  Lowell uses his charts to do everything from picking a stock to picking a suspect.  If on the other hand, you don’t think astrology is any farther out than the latest economic theories, you may well enjoy this.  Lowell is sort of a cross between a couple of mystery heroes:  his lecturing and fastidiousness reminds me of Nero Wolfe, while his leaps into action are more Jack Reacher.  Author  Lewis likes to ride his own hobbyhorses, so to speak, and one of the subplots involves the evils of lottery tickets. He also has a few interesting observations via his characters on current events. Agree or not, he gives his readers something to think about. I like that in a book.
While the book would have benefited from a bit more editorial intervention to smooth out some of the clunky writing, I still had fun reading it. I particularly liked the way that Lowell tries to explain astrology.  Most light mysteries with “themes” leave me wondering just how much the author really knows about the subject since some of the explanations sound as if the author had just looked up the answer on Wikipedia. You will have no doubt that Lewis knows his astrology, and that he sees it as a science like weather forecasting or earthquake prediction.
A second book in the series, Death in the 12th House, is scheduled for November, 2012.  Aging rockers are meeting untimely ends, so David Lowell is called in to see if the astrological stars can solve the rock star murders. I'm sure it's not a coincidence that Michael Scott Lewis is also a musician who has some insider cred.
If you’re intrigued, Lewis has his own website where you can read some of his writing about astrology, predictions, and watch videos of interviews.  The site is www.mitchastro.com.
Posted by BPL Ref at 10:23 AM