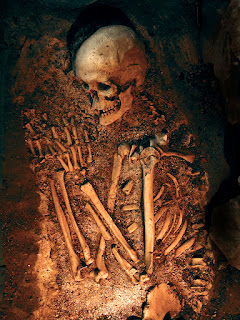 Reviewed by Jeanne
Archaeologist David Isaacs is more than a little surprised to get a call from his one-time mentor Noel Sprague. They had parted on somewhat less than cordial terms, especially since Sprague had married the woman Isaacs loved.  He finds Sprague hasn’t changed: he’s still a bit of a bully, behaving as if the others are at best marginally competent.  However, Isaacs needs the job.  He ran into some trouble on a previous dig and is in need of a bit of redemption and Sprague needs someone with experience in underwater archaeology.
Isaacs arrives on the Chesapeake Bay Island and learns that they’ve uncovered three Colonial era lead coffins which were buried on the far end of the island, away from the settlement.  The reasons seem vague, some talk of witchcraft or curses but there are no records to explain.  Burials of that type are definitely an anomaly for the time period, making this an exceedingly rare find.  Before the coffins can even be exhumed, one of the archaeologists dies in what seems at first to be an accident but soon is revealed to be murder. Someone seems bent on keeping the contents of the coffins a secret, but a shadowy organization is equally determined to unlock the mystery, though perhaps not for public consumption.
I saw this book reviewed in Mystery Scene Magazine and was intrigued enough to read it myself.  As I recall, the reviewer there compared Hominid to books by Preston and Child but the author I thought of was Michael Crichton. Both write thrillers grounded in science and make the science fascinating in the bargain. Boland even appends a good list of references at the end to back up some of the plot elements. In fact, I’d argue that they use the thriller format to promote an interest in science; in the case of Hominid, it’s genetics and human evolution.  Both writers have a common weakness as well, and that is that their characters tend to be more cardboard than humanoid.  But flat characters never stopped me from zipping through a Crichton book, and certainly didn’t impede progress on Hominid. These aren’t authors we read for scintillating insights into the human condition but for ideas, science and action.  Boland has all that down pat.  Just when you think he’s going for one thing, the plot twists and you find yourself contemplating something else entirely.  There is a bit of repetition—characters refer to a study with mice several times—but it’s not overly annoying and doesn’t slow the pace of the book.
Posted by BPL Ref at 5:18 PM