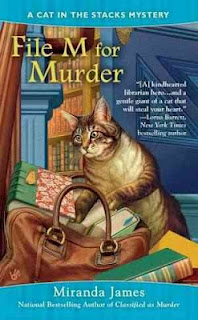 Reviewed by Jeanne
File M for Murder by Miranda James is the third of the “Cat in the Stacks” mysteries.  The narrator is Charlie Harris, an archivist librarian who works at a small college in Mississippi and volunteers at his local public library.  He has an enormous Maine Coon cat named Diesel whom he walks on a leash.  Charlie is a widower, living in an old house left to him by a deceased aunt.  He has two adult children, a son and a daughter, with whom he is attempting to reconnect following their mother’s lengthy illness and death.  Charlie is a laid back, mild mannered person, but not a wimp; he’s a large man whose ease comes from an inner assurance he can handle a situation.
As the story opens, Charlie is delighted to find that his daughter Laura will be staying with him for the fall semester while filling in for a drama professor at the college.  Also in town is Connor Lawton, a visiting playwright, who is serving as author in residence for the summer and who happens to be an ex-boyfriend of Laura’s.  He’s considered a genius by some but an obnoxious twit by most.  Since Laura is the drama coach for the student actors, she and Connor run into each other frequently, and Connor makes no secret that he wants to resume their relationship.  Also in town is an actress carrying a major torch for Connor and who sees Laura as “the other woman.”  Given his talent for annoying people, it’s no surprise when Connor ends up dead.  Charlie’s too nice a guy to feel relieved that he’s gone, but it’s soon apparent that Connor dead can cause just as much trouble as Connor alive: the police think Laura is the murderer.
This is a pleasant, easy going series with a librarian and an adorable cat.  It’s set in the South.  What’s not to like?  Okay, if you want a blood and guts mystery with car chases, this isn’t going to be your glass of iced tea.  The plot was interesting and James plays fair with the reader, giving enough clues that the mystery can be solved if one is so inclined.  The setting is realistic enough, using some nice details without laying it on with a trowel. Charlie himself is a real sweetheart, very gentle and kind, even when he thinks he’s losing his temper.  In the first book I stopped and wondered a few times if this was really the way a guy would think.  Then I found out that “Miranda” is really Dean James, so either this is really the way some guys think or Dean is playing head games by writing a guy the way a woman would write a guy.  That would seem to be way too much trouble for me and besides, it makes me slightly dizzy.  Besides, Mr. James seems like way too nice a guy to be game playing like that.

This is a pleasant series that I’ll keep reading and I know a couple of folk to whom I’ll be recommending it. The books don’t need to be read in order, but the first two are Murder Past Due and Classified as Murder. Book four is due out in early 2013.
Posted by BPL Ref at 4:11 PM