Books can take you away to exotic locales, sometimes in such detail that you almost feel you have been there in person.  On the other hand, there is often a special thrill in reading a book that describes places with which you are familiar: you know that road, or that building, or that little town. You know how the sun looks rising over that mountain. Here are two new mysteries which use Southwest Virginia and/or East Tennessee as a setting:
Long time friends Amelia, Cassandra, Sarah, and Olivia are known as “The Traveling Tea Ladies.”  They’re based in Dogwood Cove, Tennessee (which sounds a great deal like Johnson City) where Sarah owns a tea shop and Amelia and her husband own a coffee, herb and tea supply business.  In The Traveling Tea Ladies:  Death in Dixie, the four end up in Jonesborough in response to a distress call from Lucy, another friend and tea shop owner.  A rival tea shop has just opened up and the owner’s stated objective is to put Lucy out of business.  To make matters worse, this new owner is a relative of Sarah’s boyfriend—a not very nice relative, but a relative all the same.  It really isn’t a surprise when she turns up dead, but now Lucy is the chief suspect.   The book is written in a casual, friendly style and local landmarks are mentioned frequently. As an added bonus, the book is set during the National Storytelling Festival.  Author Melanie O’Hara-Salyers owned a tea shop in Johnson City and is a true aficionado.  The book includes recipes (the Treasure Island Rum Raisin Scones sound fabulous!) and tips on brewing tea. This is actually the second book in the series; the first was set in Dallas.  A third book is planned. 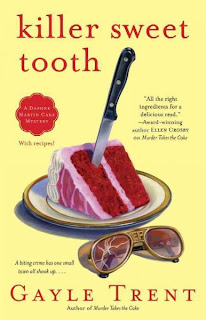 Killer Sweet Tooth by Gayle Trent brings back Daphne Martin, a cake decorator who seems to attract murder in the same way that honey attracts flies.  This time Daphne has a friend with a dental emergency, but when they arrive at the office the dentist has been murdered.  Hearing a noise, Daphne grabs the closest thing she can find to a weapon:  a giant prop toothbrush.  The policeman who finds her wielding the “weapon” is less than amused.  Just when it seems that Daphne’s day couldn’t get any stranger, she goes home to find Elvis waiting for her.  It seems he wants a cake—in the shape of a pink Cadillac, no less.  Trent has a good sense of humor and it shines through here to good effect.  There’s a lot of local color without being condescending and the writing flows well. The book is set in “Brea Ridge, Virginia” which is nestled in Washington County, Virginia.  This book also includes recipes.  There are two other Daphne Martin books:  Murder Takes the Cake and Dead Pan.  (Note:  Trent also writes the Embroidery Mysteries under the name Amanda Lee.  These stories revolve around Maggie Singer, owner of a needlework shop in Tallulah Falls Oregon and reluctant sleuth.  There are currently three books in the series which started with The Quick and the Thread.)

Last but certainly not least, Doris was a guest on Daytime TriCities talking about romance books. She did a wonderful job! You can see (and hear!) her suggestions by clicking the following link:  Doris on Daytime Tricites