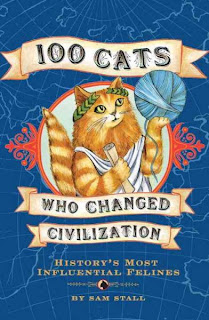 Reviewed by Jeanne
100 Cats Who Changed Civilization by Sam Stall may not quite live up to its tongue in cheek title, but it is definitely a great way to spend some time.  Some of the cats did indeed have an influence on human civilization  but most wrought change on a much smaller scale. This certainly doesn’t make them any less memorable, delightful or remarkable.  One of my favorite stories is about Oscar who, the chapter heading says, “Sank the Bismarck.”  Actually, it was more that he sank with the Bismarck—although I have to admit that based on what happened afterwards, maybe he did have a little something to do with it.  You see, Oscar was picked up by a British ship where he was dubbed “Unsinkable Sam.” Then that ship was sunk.  Once again, Oscar/Sam is picked up by a ship and —well, that one sank too. Sam was finally put ashore to live out his days in an old mariner’s home. There were some cats I already knew about—brave Scarlett, who suffered life-threatening burns to save her kittens; Dick Whittington’s cat; Mrs. Chippy who sailed on an Antarctic expedition (and was actually a he); CC, the world’s first cloned cat—but others were new.  Some I knew of vaguely, such as Charles Dickens’ cat who snuffed out his candles, but Stall supplied new details.  For example, I knew that Churchill was a cat fancier whose cat attended Cabinet meetings during WWII,  but I didn’t  know that his will stipulated that there must always be a marmalade colored cat named Jock in residence at  his home, Chartwell.  A check revealed that just this last November, Jock V has been moved in.  A young rescue, he’s been making himself quite at home and enjoys jumping into the sinks.
The book is divided up into categories, such as “Science and Nature” and “Profiles in Courage.” Stall has a sense of humor without being silly, and the stories range from amusing to somewhat sad.  He keeps the stories short, just over a page, and avoids being too sentimental.
To be honest, I was surprised by how much I enjoyed this book.  I’ve read one or two (or sixteen or thirty) similar books, and this one kept me going back for “just one more story.” I may be getting some copies as gifts for friends as well.
Posted by BPL Ref at 3:20 PM