I Am Half Sick of Shadows: A Flavia de Luce Novel by C. Alan Bradley 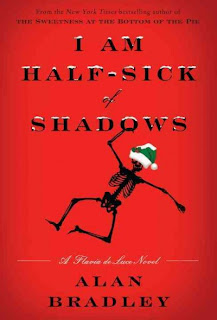 
One of the most difficult things about doing book reviews for me is to decide exactly how much to tell about a book.  In the course of my work, I read a lot of reviews; sometimes I start to feel that I’ve already read the book because I know so much about it without ever having so much as cracked the cover.  In the case of I Am Half Sick of Shadows by C. Alan Bradley, I’ve thought long and hard and concluded that probably the best way to introduce it is to do a bit of a spoiler; otherwise, it’s rather difficult to explain to someone unfamiliar with this series.
When the book opens, eleven year old Flavia is skating down the long portrait hall in Buckshaw, her castle-like ancestral home.  There is no heat, and once flooded, the water immediately turned into ice.  She can see the pattern of the parquet beneath from the candles she set into the chandeliers.  She fantasizes that some celebrity photographer will be by and take her photo, which will then appear in a leading magazine.  Wouldn’t that just make her sisters puce with envy!  At this point, Flavia awakens in her bed, though it’s almost as cold as in her dream.
If your reaction is, “Well, of course it was just a dream!  No one would really flood a house and skate down a hall!” then you haven’t yet made the acquaintance of Flavia de Luce.  People who know the precocious chemist would have no trouble at all believing that Flavia would do just that, strictly in the interest of science (and to annoy her sisters and astonish her father).  Flavia is a wonderful creation; she sounds like an adult for the most part and a very learned adult at that, but she is still basically a child.  Part of the fun is seeing Flavia’s interpretation of events.
The series is set in the 1950s English countryside where the de Luce family has lived for generations as the local gentry.  Times have not been good; the family has been financially strapped since Harriet, Flavia’s mother, perished in the Himalayan Mountains. Now Buckshaw has been rented out to a film company in an effort to raise money.  The family is divided about this turn of events.  Father is embarrassed but resigned, seeing no other way out. Flavia’s older sisters Daphne and Ophelia try to appear blasé about the worldly thespians who are descending upon them but are secretly intrigued. Flavia herself is more preoccupied with her plans for the holiday, plans which should secure her place in history:  she is going to capture Father Christmas. She has begun to harbor a touch of doubt about the existence of the jolly old elf, and –being Flavia—would like to settle the matter scientifically.
Meanwhile, the film crew has descended and it isn’t long before Flavia becomes aware of some conflicts held just below the surface.  In a grand gesture, some of the cast agree to participate in a fundraising event for the local church.  Tickets are sold and half the village shows up, just as a snowstorm makes travel impossible. This insures that there is no lack of suspects when one of the actors is murdered.

I can't say that the series continues to improve because it was a great series from the start.  The second book slipped just a bit for me, but the overall quality has remained consistently high.  Witty, with a wonderful set of characters and marvelous atmosphere, I recommend this series unreservedly.  If you're among the fans of Downton Abbey,  you might give this series a try.  It's set a couple of decades later, but there is a bit of the same feel about it.  You don't need to read the books in order but if that's your preference, start with The Sweetness at the Bottom of the Pie.
Posted by BPL Ref at 9:12 AM

Email ThisBlogThis!Share to TwitterShare to FacebookShare to Pinterest
Labels: Alan Bradley, Flavia de Luce, I Am Half Sick of Shadows