Southern Appalachian Celebration, A History of the World & Tales of Invention

Jeanne's Books In Brief
We've been getting in a number of wonderful new books lately! Here are some brief reviews just to whet your appetite: 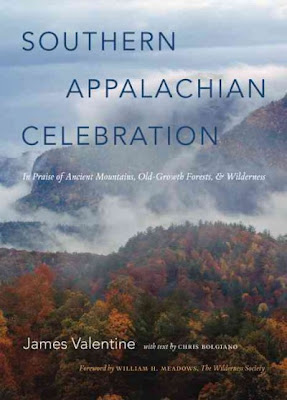 Southern Appalachian Celebration:  In Praise of Ancient Mountains, Old-Growth Forests, and Wilderness by James Valentine is a glorious collection of photographs showcasing the beauty of the mountains in our region.  Our director Jud Barry is especially fond of a shot of Roan Mountain with the rhododendrons in full bloom.  While there have been any number of such photos, this one is taken from an unusual angle, leaving one to wonder just exactly where the photographer was standing.  The informative text by Chris Bolgiano identifies the area and fauna along with fascinating tidbits that range from the historical to the scientific; this is one of the few books in which the captions really give an added dimension to the book.  For example, along with a shot of Cumberland Falls in Kentucky Bolgiano tells us that it’s said on clear nights with a full moon one can observe a lunar rainbow.   This is a real gem of a book and comes highly recommended. 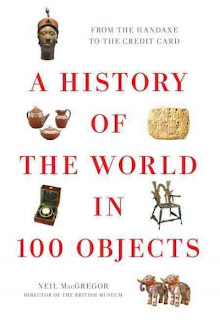 A History of the World in 100 Objects  by Neil MacGregor is a deceptively simple description for a complex book.  The idea was to draw upon all the resources in the British Museum in order to tell the story of humankind.  Just think about it for a moment:  if you had to choose items to tell the story of all humans, all civilizations and cultures, from the beginning to the present, what would you choose?  The first items in the book are stone implements.  At least one color photograph accompanies each, along with commentary that incorporates what is known or theorized about the object and how it was used.  The final entry is a solar light and battery from 2010.  In between, there are all manner of objects, from paintings to statues to maps to musical instruments to weapons.  One personal favorite is the helmet from the Sutton Hoo burial, a magnificent piece that was found as part of a ship burial for an unknown hero. The number 100 is apparently a popular one for book titles because also on our new book shelf is Rick Beyer’s The Greatest Science Stories Never Told: 100 Tales of Invention and Discovery to Astonish, Bewilder, & Stupefy. As you might guess, the book is a fun and somewhat off-beat collection of stories .  The stories are real and Beyer’s renditions are entertaining, though he reduces the stories a just about one page. There’s the tale of the Olympic gold medalist and inventor whose scientific toys were so intriguing that he prevented a ban on toy sales during wartime, and the one about King Camp Gillette who not only saw the need for a disposable razor but who had big plans to make the world a utopia. The stories are arranged chronologically. Alas, there is no index; if you want to read about Einstein’s refrigerator, you have to page through.  A personal favorite is the entry for 1947-- no, you won't be surprised at what it is. Beyer does include a list of his sources, if you want more information.
Posted by BPL Ref at 9:06 AM