Famous (and not so famous) Last Words 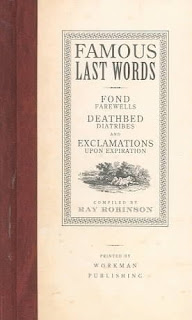 Reviewed by Nancy
Well, this is just so interesting. This is what I say to myself so often when I find myself reading odd books. I must admit, I just love odd books. There was the book about being in jail, the book about sociopaths, the book about how people behave in crises, the books about UFOs, the book about... well, never mind. Anyway, this is a fun little book, and, yes, it's rather peculiar. Compiled by Ray Robinson, Famous Last Words gives us just that: deathbed utterances of some famous and some not so famous people.

In the introduction Mr. Robinson explains how it was that he came to be a collector of deathbed pronouncements, and how this preoccupation eventually resulted in the publication of his book.

Famous Last Words is quite readable, and chock full of interesting tidbits. For example, Mata Hari, the Dutch woman convicted of spying for Germany before the First World War, refused a blindfold and blew the firing squad a kiss just before she was executed. What she said before she died did not impress me much, but I think that kiss blowing is really something. If I were facing a firing squad would I be cheeky enough to blow anybody a kiss? I am happy to say we might never find out. If you ever hear that I am to be executed for something, please stop by for the execution. I will try to think of something entertaining to say or do.

Sometimes instead of being immersed in sorrow over the fact that whoever it was died, I find myself laughing myself off my chair. General John Sedgwick was killed at the Battle of the Wilderness during the Civil War. His last words were, "They couldn't hit an elephant at this dist-."

It seems this tome might provide a rare opportunity for research if one considers the possibility that people who are "at death's door" might get a glimpse of what lies beyond death's door as they are about to pass through that door. Here's my imagined scenario.

Someone is on his/her death bed, not quite out of this world, not quite into the next. As this person is about to die, but not quite dead, the door to the afterlife slowly begins to crack open, so in that last second when they are still in this world, but about to enter the next they can see into that next world about which we are all so curious, and possibly report back to someone who is still struggling on this earthly plane WHAT IT IS THAT THEY SEE? WHAT IS GOING ON IN THE AFTERLIFE?

Hmmmm.
Reading the rest of the book seemed to offer me no other insights regarding the afterlife, but the quotes are fun and the book is entertaining.

I would like to close by offering you one of the more interesting quotes. Actually, I'll offer two.

Carl Panzram was a convicted murderer. Just before he was executed he said, "I wish the whole human race had one neck and I had my hands around it."

Lady Astor, the first female member of the British House of Commons, died at the age of eighty-five. Shortly before dying she woke from sleep to find her entire family gathered around her bed. Her comment? "Am I dying or is this my birthday?"
Posted by BPL Ref at 9:50 AM