Anteater of Death by Betty Webb 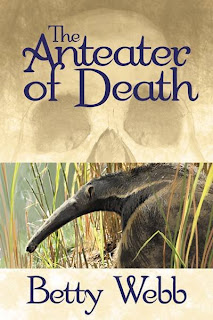 Zookeeper Theodora “Teddy” Bentley is devoted to her charges and loves her job.  When a body is discovered in the enclosure for Lucy, the pregnant giant anteater, it appears that Lucy and the zoo may be in jeopardy.  For one thing, even though the autopsy proves that Lucy clawed the man after he was dead, the anteater is now seen as a vicious animal who needs to be confined to a box or else sent away. For another, the deceased was on the zoo’s Board of Directors.  It doesn’t help that Joe Rojas, the investigating sheriff, was Teddy’s first love and that the dead man is a member of Teddy’s extended family.


This is the first in a new series for Webb, best known for her gritty mysteries starring private investigator Lena Jones (Desert Noir, Desert Shadows, etc.) The set up is especially intriguing for animal lovers, because Teddy’s job brings her into contact with all sort of exotic (and not so exotic) species with tidbits of information about each thrown in as Teddy makes her rounds.  Webb is careful to convey that the job isn’t glamorous: there’s a lot of hard work involving cleaning excrement, avoiding being nipped or clawed or bitten, and trying to educate a public that all too often believes the Disney version of wildlife. In one instance, a woman endangers her child by dangling him inside an animal’s enclosure.  Sound farfetched?  Not two days after I read the book, a co-worker encountered a group of people who were trying to get photos with bears.  Yes, real, not caged, free-roaming black bears—and a mother with cubs to boot.  They even tried to follow the bears into the woods.    I also liked the fact that many of the animals Teddy works with are not the apex exhibits (elephants, lions, tigers, gorillas) but animals that are less flashy but no less interesting such as the capybaras.


Teddy’s family is also rather exotic: her mother was a member of a wealthy family, but Teddy’s rapscallion father managed to run through most of the money in various schemes that has him on the run from the law.  Teddy knows her share of wealthy and influential people, which causes some to assume that she is just playing at work.  In reality, she’s living on a houseboat because she can’t afford anything else in the upscale community, and is barely making ends meet on her zoo salary. She’s also recovering from a nasty divorce and determined not to leap back into the arms of Joe when both of them are so vulnerable.  However, the character relationships don’t turn into soap operas, and the murder remains a high priority.
Teddy herself is an appealing heroine, a girl who knows her way around society while preferring the company of Regular Joes and Janes.  She knows and appreciates the value of wealth—all the good things that money can buy—but she prefers to earn it herself. Her strong sense of integrity also endeared her to me as well as her love for animals.


There’s a good amount of humor in the book, though it’s not slapstick.  The pacing is good and the characters are well-developed for the most part, the exception being a sexist man on the make who uses his position of power to prey on women.  Teddy’s mother, for example, is forever trying to get Teddy to dress up and find a wealthy husband yet Caro turns out to have her own hidden passions. The mystery was well done with real clues among the red herrings.


In short, I enjoyed this book and am looking forward to reading the next in the series, The Koala of Death!
Posted by BPL Ref at 6:40 PM