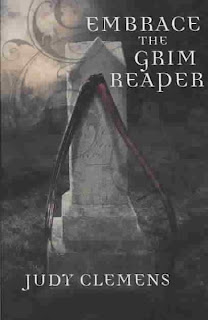 Reviewed by Jeanne
Casey Maldonado was the only survivor in a horrific wreck which killed her husband and son.  Wracked with grief and survivor’s guilt, she wanders the country alone, on the run from her past.  Well, not quite alone:  Death wanders with her.  Death refuses to take her, but seems intrigued or at least bemused by her journey.  Casey ends up in a small town with a grief of its own: the largest employer in town is shutting down, and a beloved citizen has committed suicide.  Or did she? At Death’s urging, Casey begins to investigate and soon finds there may be much more to this “suicide” than meets the eye.
This book reminded me of all these old TV shows I used to watch in which the hero moved from town to town, met a host of interesting people, solved a problem and moved on:  Paladin, Then Came Bronson, or even The Littlest Hobo.  (Anyone remember that one?)  Anyway, the closest series would probably be Kung Fu, given Casey’s expertise in martial arts.  Clemens does a good job of doling out information about Casey’s past in small doses, making us eager for more, which also moving the current storyline along.  Casey is a sympathetic heroine, one traumatized by her accident but still a strong and determined personality.  She’s nearly fearless—in her view, she doesn’t have anything left to lose—but she isn’t stupid.   She’s also resourceful and compassionate. She’s an excellent character on which to build a series.
Naturally, the series hook is Death.  He’s undescribed for the most part, and the only people who can see Death are those who don’t fear him.  He isn’t all-knowing and while he’s there at the moment a person passes he doesn’t know anything about the circumstances so he can’t solve the mystery for Casey.  Reviewer Cynthia Noyes points out that Death’s passivity is one reason the character is so intriguing: exactly what is his nature?  He says he’s following Casey because he’s interested in her journey.  He goads her into doing things, though there are times she disregards his suggestions without dire consequences.  Some things he suggests seem to be for his own amusement, such as going home with that handsome young man who manages the soup kitchen, so it doesn’t seem that Death has a specific agenda… at least not one we’re privy to at this point.
This is the first in the series and it is a promising start.  The weakest part for me is the reason Casey is on the run.  It’s something to do with the CEO of Pegasus Motors, maker of the car which exploded and killed the family, who is determined to track Casey down.  There has been a settlement, giving Casey ample funds to travel; she occasionally calls her brother or her attorney, but wants to avoid the CEO at all costs.  While this supplies a good deal of tension in the book—Casey definitely gives the impression she’s being hunted down as if she were a criminal—the explanation for why she’s being chased is rather murky. This quibble is rectified in the next book, I gather, and she has more compelling reason to be on the run.  It’s not a gloom and doom series, nor is it all metaphysical sweetness and light.  Instead it’s a solid mystery with just a hint of the paranormal.
(If you want to read Cynthia Noyes’ review, check it out at http://bluepigcafe.wordpress.com/2011/03/14/judy-clemens-and-the-grim-reaper/)

Update:  I’ve now read  The Grim Reaper’s Dance, second in Clemens’ Grim Reaper series.  The story picks up shortly after the first book ends, with Casey hitching rides with truckers to move across the country.  Her latest ride is with Evan, a nice guy who wants to talk about his family.  He’s looking forward to taking some time off to spend with his girls.  He doesn’t get the chance: the truck crashes into a road block and Evan is mortally injured.  Before he dies, he tells Casey the location where he’s hidden some papers, asking her not to let THEM have the papers.
It soon becomes apparent that the people he’s referring to are the ones who set up the roadblock in the first place, desperate men with secrets to hide.  Unfortunately, the papers Evan left don’t really explain what’s going on, so it’s up to Casey to figure out the scam and to identify the people behind it before anyone else gets hurt.  Casey, for example.
Again, Casey meets an interesting array of characters who, while not fully developed, are generally likable or at least basically decent (except for the bad guys, of course).  Since the cast changes every book, there’s not going to be a lot of character development there.  What is developing and changing a bit is the relationship between Casey and Death.  That’s the series “hook,” and a good one it is.  This time Death is apparently on a music kick, and uses every opportunity to sing, pluck, drum or at least hum various tunes.  Clemens leaves the door open so that if you choose to think Death is real, you have ample evidence; but if you prefer to see the character as a subconscious manifestation of Casey’s grief, you can.  The interplay between these two is entertaining and in some ways, thought-provoking in a “Death Takes a Holiday” sort of way. Casey’s reasons for being on the run are pretty much ignored in this book; the reader is just expected to go along with her need to hide out.  I found that this actually worked better for me than reasons I found a bit too vague in the first book; it left me free to concentrate on the mystery at hand. The episodic nature of the books also makes it easy to start this series at any point.
I’ve enjoyed both, and will be looking forward to the next book in the series.  Flowers for Her Grave is due out later this year.
Posted by BPL Ref at 5:25 PM