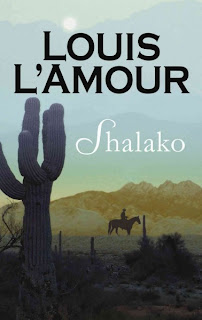 The Library got a new copy of this book, so I decided to revisit one of my favorite authors. Louis L’Amour was undoubtedly one of the best western writers of all time. Congress awarded him the Congressional Gold Medal for his work. President Reagan awarded him the Medal of Freedom. They just don’t come better.

Shalko (SSB LAM Main) meets his high quality standard. Unknown to many, a band of renegade Apaches are raiding across the border. At the same time, Baron Frederick von Hallstatt sets out on a hunting expedition which is really camping trip complete with white tablecloths, wealthy friends and a beautiful fiancée. Trained in European military tactics, he wouldn’t mind a “tussle” with the natives.

Shalako is a loner who loves the wild country and owns nothing but his horse and gun. He discovers a man who was ambushed by the Apaches. Backtracking, he discovers the man was the hunting party’s guide. There he meets the beautiful and independent Irina Carnarvon. From a wealthy family, she has traveled wild territory before with her father. She is also engaged.

An attack on the group is imminent. Some of the party’s wagoners had their own plans of robbery and abandoning the group to the tender mercy of the Apaches. It soon becomes a battle of survival which will test the mettle of all the main characters.

Louis L’Amour spins a tale that is action packed with a spicing of romance. Values and strength of character are a theme that runs throughout his stories. Shalko is no exception. He also philosophizes about independence. He portrays a clash of cultures, European social status vs. western independence, but ties it up with respect for both. Even the death of the Apache leader is recognized with honor: “Brother! Warrior!”

Louis L’Amour’s books are worth a reread. Every time I read one, I leave just feeling good.
Posted by BPL Ref at 10:13 AM