We had a special Saturday edition of the Nevermore Book Club in conjunction with Believe in Bristol’s State of the Arts events.  Director Jud started the session with a challenge:  he would show us five musical instruments which we may not even have heard of ere now and we would be able to remember them an hour later.  Skepticism was rife, but using the principles from Moonwalking with Einstein:  the art and science of remembering everything by Joshua Foer he was sure we could do it.
And he was right!  In fact I still remember the ophicleide, bombarde, doumbek, oud and mbira though I confess I had to do some looking to find out how to spell “ophicleide.” I’m still not really sure what all the instruments are, but I do remember them!
As usual with book club, one topic leads to another.  I had A Presumption of Death by Jill Paton Walsh which uses the characters created by Dorothy L. Sayers in her series of mysteries featuring Lord Peter Wimsy.  We talked about one writer using another’s characters, the difference in reading a book written during the 1940s and one written in 2006 but set in the 1940s, and how changing attitudes can sometimes cause a problem with older books meant for children. 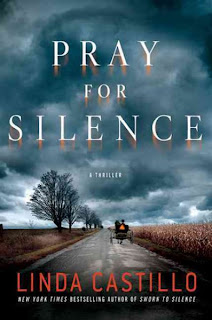 Doris started another interesting discussion with Pray for Silence by Linda Castillo.  Police Chief Kate Burkholder is called to investigate a case where an Amish family has been slaughtered.  Since Kate was raised in an Amish family, this case causes her to revisit her own past.  Books set among the Amish have become very popular in the last few years and we discussed some of the aspects of Amish culture, but almost before we knew it the time had just flown by!
Tuesday’s Nevermore had an even wider selection of books being championed by readers!  Jud had the new book by David Sedaris, Squirrel Seeks Chipmunk.  It’s a collection of animal fables rather like Aesop if that old Greek had been possessed of a darkly comic, cynical humor and a taste for the absurd.  Sedaris isn’t everyone’s cup of tea, and neither is Jasper Fforde, but both have devoted followers.  One of Our Thursdays is Missing is Fforde’s latest entry in his BookWorld series, in which characters pop in and out of classic novels and different literary genres may be at odds. (Peace talks are going on between Women’s Literature and the Racy Novel, for instance.)  Literary jokes abound, of course.
Twelve Steps to a Compassionate Life by Karen Armstrong provided a change of pace.  Armstrong is a former Catholic nun and respected writer on religion who worked with a number of religious leaders to compile a “Charter for Compassion.”  Thoughtful, moving and empowering, this is a great choice for anyone wanting to live a more aware life.
The Room by Emma Donoghue, the novel about a child and his mother held prisoner, is still making the rounds of readers.
The new Tom Clancy book, Dead or Alive, features the return of Jack Ryan, Jr. as he seeks out the terrorist known as the Emir. It was in the process of being read, so no verdict as yet!
The Hotel on the Corner of Bitter and Sweet by Jamie Ford alternates between the 1940s and 1980s when Henry Lee, a young Chinese boy, befriends a Japanese girl prior to the Japanese internment.  In the 1980s, the discovery of an item thought lost causes Henry to remember his first love. 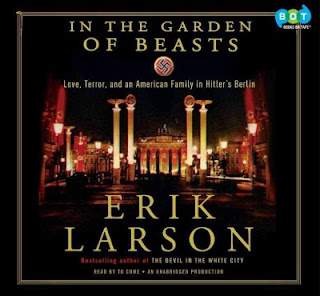 Erik Larson, best known for Isaac’s Storm and Devil in the White City, has a new book out.  In the Garden of Beasts: Love, Terror and an American Family in Hitler’s Berlin is the riveting true story of the William Dodd family, who moved to Germany in 1933 when Roosevelt appointed Mr. Dodd ambassador to the Third Reich.  Initially charmed, Ambassador Dodd begins to grow increasingly uneasy with the way new laws begin to shape the society.  Meanwhile, one of his daughters is infatuated with the dashing Nazi officers, including the first chief of the Gestapo. Of course, we read it with the full knowledge of what was to come; the principals were living it.
Posted by BPL Ref at 9:28 AM