Lessons from Lucy by Dave Barry 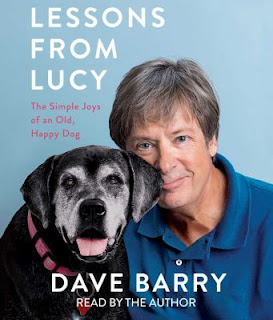 Dave Barry is a Florida based humorist probably best known for his newspaper columns, collections of which have hit the best-seller lists.  He also won a Pulitzer for Commentary.  His most recent book was entitled Lessons from Lucy:  The Simple Joys of an Old, Happy Dog which humorously describes what things give Lucy joy and what we (and Dave) can learn from her. He distills these down to seven lessons, illustrating each with stories about both Lucy and his own behavior.

For example, the first lesson is about how Lucy loves to meet new people as well as engage with her friends (i.e., almost everybody, human or dog).  Dave, not so much—especially the meeting new people part—but he does vow to try, though he may draw the line at sticking his snout into someone’s groin the way Lucy does.

As Barry admits at the end, these lessons for self-improvement and happiness aren’t original and aren’t particularly profound:  they are pretty much common sense which is why people tend to ignore them.  Besides, while he does have a point to make, it’s really the way he relates the lessons that makes this book stand out.  Dave Barry is one funny guy.  I found myself smiling a lot (though not at the parts about cats, as he makes no secret that he is not a fan) and during the essay about the family’s travails during Hurricane Irma, I even laughed out loud in recognition. When Perky Weatherperson reports that a hurricane is on the way, Floridians flock to the stores to buy all sorts of things, from batteries to bleach whether they need them or not.  Anyone with the courage to go to a local store after a prediction of snow knows the feeling—and knows not to get between anyone and the shelves of milk or bread.

All of the lessons are true and entertaining, from fun with the Lawn Rangers and the Rock Bottom Remainders, until one reaches the post book section.  This wasn’t supposed to be a part of the book, but just prior to publication a family member suffered a potentially life changing illness which became another lesson in living. It's moving and heart-felt, and gives the book more of an urgent feel.

I listened to this on audio and enjoyed it.  Barry reads his own material and while there are times when the delivery is a bit stilted, he makes up for it with enthusiasm at appropriate points.  My intent was to get a copy as a gift for a dog loving friend but I may have to rethink that.  No, Lucy the dog is fine!  It’s just that Barry says several times that he is 70 and hasn’t that much longer to live.  By coincidence, that is the exact age of my friend and while I think he would enjoy the bulk of the book, I am not sure about a gift which reminds someone they are about to die.  It’s one thing to contemplate one’s own mortality and a different thing to make someone else think about theirs.  So I may pass on the gift, but I’m glad I listened to the book.