A Cat on the Case by Clea Simon 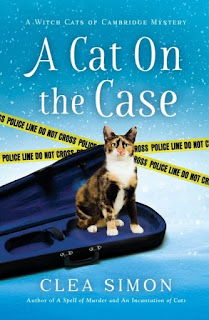 Becca Corwin, aspiring witch, has a day job at the Charm and Cherish, a New Age shop in Cambridge.  Becca has offered her services as a detective, but so far there have been no takers even though she has had some success in the past.

But, unbeknownst to Becca, those successes were actually due to her three cats who—unlike Becca—actually do have powers.  In fact, it was due to fluffy orange Harriet that Becca came to believe she had power after the luxury-loving feline conjured a pillow. Haughty Siamese Laurel believes that Becca should just spend her days looking after her cats, and possibly find a boyfriend.  Our protagonist, loving calico Clara, is the one who worries about her person and tries to help out despite the snippy comments from her sisters. Clara has taken to surreptitiously following Becca to work, using her power to (mostly) hide her presence.

This day, a young woman comes into the shop asking about a “witch detective.” She leaves before Becca can get the full story out of her, but leaves behind a violin in a case.  It seems like an old instrument, possibly valuable, so Becca is determined to find the owner.  Along the way, she encounters theft, lies, and murder—and maybe a case too big for Clara’s paws to handle. But Becca is determined to solve the mysteries and Clara is just as determined that Becca isn’t going to tackle a murderer alone.

This is the third in the Witch Cats of Cambridge series which started with A Spell of Murder and An Incantation of Cats.  You don’t have to have read the first two to enjoy this one, though I have to say I prefer to read in order because I like to see how the characters develop.  In this one, Clara learns more about her heritage and the mystic charge laid on her from ancient times.  Clara is a sweet, caring soul who loves Becca with all of her heart.  She is very young, though, and not as worldly as her sisters—as they keep reminding her.  The dynamics between the feline sisters is entertaining; each is a strong personality and, just as in human families, there’s a certain amount of competition and bossiness between the siblings.

Becca is oblivious to all of this, believing her cats are just her pets.  She has her own human circle of friends and a few foes to contend with, from the wise and sympathetic Elizabeth to a new, irate neighbor.  She also has concerns that the cats can’t comprehend:  earning money, for one thing, and the lease on her apartment for another.

Simon is no stranger to series work, having four previous ones to her credit including the Pru Marlow books which featured a pet psychic as the lead character (well, human character as I expect Wallis the crabby tabby would believe she deserved top billing) and the Dulcie Schwartz series in which a grad student solves mysteries with the help of her ghostly cat, Mr. Grey. Simon well knows the ways of cats and one thing I have appreciated in all her series is that the felines—actually, any animals—who appear are distinct personalities in their own right, not just furry props.

I also love that Simon likes to pull in history along with her stories, though I will admit I sometimes get more caught up in the history part than the current case! That’s just me—and probably why I like reading series in order so much.  I get invested in the characters and am as avid to discover backstory as I am to go forward with the current action.  It’s not just character and plot; there’s a bit of world-building going on as well.

So if 2020 has left you feeling a bit burned out, put a little magic back into your life with a visit with the Witch Cats of Cambridge.