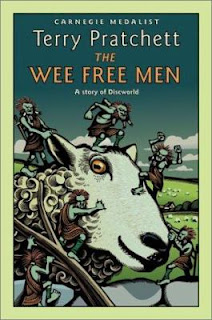 Nine year old Tiffany is the granddaughter of a shepherd who may or may not have been a witch.  She sees the world in unusual ways, and when a creature tries to trespass, she takes it out quickly. Okay, she may have used her baby brother as bait, but needs must, right?

The creature in the river isn’t the only oddity around; Tiffany has caught glimpses of some six inch high blue men who have flaming red hair and seem to be wearing kilts—well, the ones who are wearing anything at all. These are the Nac Mac Feegle, the Wee Free Men, also known as pictsies (definitely not pixies).  They are immensely strong, and born for drinking, fighting, stealing, and fleeing in terror at lawyers.  They’re also leery of Tiffany who they call a“wee bigjob hag” and (horrors!) she can write things down.  While not her first choice of allies, they become indispensable when she has to find her missing brother.

Soon Tiffany will find herself facing a fearsome Queen, a horde of nightmares, and the prospect of matrimony. How will she ever prevail?

I have enjoyed several of Pratchett’s Discworld novels, but I have to say I find the Tiffany Aching tales to be particularly enchanting.  They have Pratchett’s trademark humor—lines that beg to be read aloud to someone, even if you have to chase them down to do it.  One of my favorite exchanges is when Tiffany approaches a traveling teacher and says she has a question about zoology:

In another passage, he comments that people were glad to see the teachers because they would tell a child enough to stop him asking questions, but they wanted the teachers gone by sundown for fear they’d steal chickens. I will spare you other favorite sections—oh, how I want to tell you about the teachers under the stars! —but this will give you a bit of the flavor.

However, the books aren’t just fluff and fun.  There’s a thread about figuring out who people really are.  Tiffany’s beloved grandmother was a rough, taciturn old woman who took care of sheep.  She was respected in the community for her abilities, with folks leaving her favorite Jolly Sailor tobacco as payment, but Tiffany begins to wonder if there was more to Granny than she thought.  More to the point, is there more to Tiffany than she knows?

There are also some shrewd and pointed observations about society and human behavior along the way, and the books have uncommon heart. Tiffany finds there were consequences for her previous actions, but she is brave, resourceful, and takes responsibility.  She will set things right because she caused the problem, even if she didn’t mean to.

I think if I could live up to Pratchett’s ideals I would be a better person and the world would a better place.
Posted by BPL Ref at 10:30 AM