The Boy, the Mole, the Fox and the Horse by Charlie Mackesy 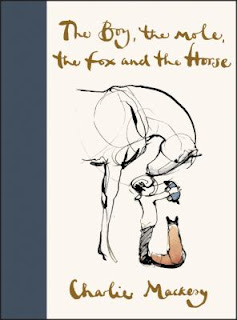 This is one of those books that you hear about, someone commenting they loved it, best seller list, that sort of thing.  What is missing is, “What is the book about?”   After reading it, I can see why that part is missing, because it’s not really a book one can pigeonhole.  Described by the author as being for anyone “from eighty to eight—I feel like both sometimes,” it consists of a series of ink and watercolor drawings of the titular creatures with bits of dialog between them.

It’s a calming sort of book; the mole asks the boy what he wants to be when he grows up and the boy responds, “Kind.”  At another drawing, the mole says, “Most of the old moles I know wish they had listened less to their fears and more to their dreams.”

At one point they meet a fox caught in a snare, and though the fox tells the mole if he weren’t trapped, he would eat him, the mole frees the fox. The fox remains with the others, and (spoiler alert) does not eat the mole. That is about as much of a plot as there is, but then this book isn't about plot.

At the publisher’s site, the book is promoted as offering empathy and self-care.  That’s what this book is all about.  It’s a moment to pause and ponder, and for that reason, I think it’s best read a few pages at a time rather than all at once.

The illustrations are charming, like those from a beloved childhood book.  Some of the illustrations put me very much in mind of Ernest Shepard’s drawings for the Winnie the Pooh books.  The text is done in a handwritten format which I confess I found a little difficult to read at times but which does add to the intimate feel of the book and complements the artwork.

So if you feel the need for a few minutes of peace during a stressful time, this is an ideal book to turn to.  It is thoughtful but not demanding and I found it soothing, encouraging, and comforting.
Posted by BPL Ref at 11:00 AM

Email ThisBlogThis!Share to TwitterShare to FacebookShare to Pinterest
Labels: artwork, Charlie Mackesy, comfort read, drawing, The Boy the Mole the Fox and the Horse