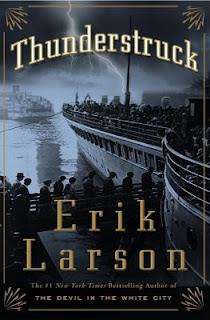 Erik Larson is one of those non-fiction authors who can make history come alive.  Even more amazing, he can take two seemingly disparate subjects and blend them into a compelling narrative as he did with Devil in the White City which tells the incredible story of the 1890 Chicago World’s Fair which introduced a number of innovations to the world and the story of H.H. Holmes, one of the first known serial killers.

Following that formula in Thunderstruck, Larson tells the story of Guglielmo Marconi, an Italian-Irish inventor who believes he can send messages over long distances, and Hawley Crippen, a mild mannered patent medicine salesman who will soon be accused of a horrifying crime.  As usual, I became absorbed in both strands of the book, always briefly regretting when the story shifted from one part to the other, but within two pages being just as involved as I was before.  I will admit that some parts were a struggle for me as I have to admit I still don’t quite grasp the principles of the wireless, no matter how Larson tried to explain. However, I was captivated by the human aspect and learned a great deal.

My first surprise was in finding that the stereotype of Marconi as a broken English speaking Italian is unfounded.  While he was born and raised in Italy, the son of a prosperous businessman and farmer, his mother was an Irishwoman:  Anne Jameson, and yes, she was one of THOSE Jamesons; the founder of Jameson Whisky was her grandfather. As a Protestant, Anne took a dim view of having her son educated by priests, so his formal schooling was sporadic. When he was sent to school at twelve, he was ridiculed for his Italian language skills and referred to as an Englishman.

Marconi soon made his way to England where his perceived arrogance raised some hackles.  Larson explores the interesting dynamics of the scientific societies of the times, where strong personalities tended to take sides.  Marconi wasn’t the only one interested in electricity and wireless messages.  There were a number of people working on the same topic, and achieving promising results, and some felt Marconi was a pretender.

Meanwhile, we are introduced to Dr. Crippen and his wife Cora, a mismatched couple if ever there was one.  She is loud, outgoing, and determined to have a career on stage; he is quiet, introverted, and content to stay in the background.  Her ambitions and social climbing keep them on the move, even as she tends to berate her him and flirt with other men.  Friends say that he adores her.

And then Cora disappears.

How these two stories intersect to the great elevation of one of the players and the destruction of the other is the core of the book.  Here was a story that held audiences breathless on two continents and saw the dawn of the communications era.

As with the other books I’ve read by Larson, this one entertained as it enlightened.  Larson documents his work very carefully, so I felt I could rely on his descriptions of events and follow up if I were so inclined.

Highly recommended for anyone interested in the birth of wireless communication or in historical true crime.
Posted by BPL Ref at 10:06 AM