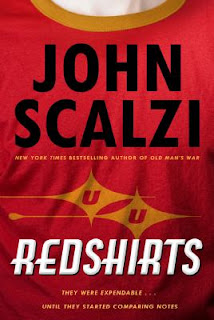 Most Star Trek fans are familiar with the concept:  On the original series, if you were a minor character wearing a red shirt, you were at risk of serious peril during each weekly show.  If called upon to accompany Captain James T. Kirk, Science Officer Spock, and/or Dr. Leonard McCoy on an away mission, the red-shirted crewmember was most likely doomed to be pushed down a cliff, vaporized, or have all the sodium chloride sucked out of their body.

John Scalzi has taken this idea and run with it in Redshirts.  The crew of the Intrepid, the flagship of the Universal Union (a cooperative galactic organization very similar in feel to the aforementioned Trek universe’s United Federation of Planets) has been roaming the skies with aplomb in the twenty-fifth century.  Ensign Andrew Dahl is proud to have such a prestigious assignment, but he very quickly notices that his co-workers go out of their way to avoid being chosen for away missions, or indeed to be any nearer to the senior offices than absolutely necessary.  How many times could the other menial crewmembers be running to the mess hall for coffee or checking a supply room just as their fearless leader Captain Lucius Abernathy or chief science officer Commander Q’eeng steps foot on the deck?

But wait—this work of science fiction is set in a future version of our real world, a world in which Star Trek really was on television screens in the late 1960s, inspiring many more science fiction shows with wildly incredible plots.  Ensign Dahl begins to notice that the crew of the Intrepid seems to be controlled by some larger ‘Narrative’ which throws lesser crewmembers into the gaping jaws of Borgovian Land Worms or kills them with the Merovian Plague.  Is the rank-and-file crew simply living their lives not through free will, but in some predestined manner solely intended to add some tension to the storyline of the ranking officers of the Intrepid?

I found Redshirts to be a really fun book with strong characters and a quickly moving plot.  The ridiculousness of the perils the crewmembers faced added to the humor.  Just like in Star Trek, giant worms, black goop, and rocks are equally likely to eat any humans which dare to venture into their path.

After finishing this novel, a new John Scalzi book arrived at the library.  His author photo particularly caught my eye, not for his physical features, but for the fact that his cat is photobombing him.  I will definitely be starting his other space saga entitled The Interdependency series, first with The Collapsing Empire and followed by The Consuming Fire.
Posted by BPL Ref at 1:13 PM