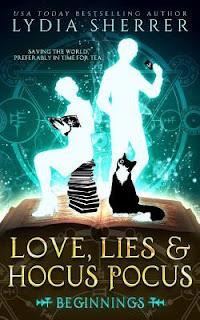 Lily Singer is perfectly happy in her job as Archives Manager at the McCain Library of Agnes Scott College.  She has recently decided to try online dating, with less-than-promising results.  The men she meets are inevitably much older and much less attractive (in so many, many ways) than their profiles indicate.  Then there’s her friend Sebastian.  He has a tendency to try to get by on his good looks, which works amazingly well in most cases.  He’s a bit lazy, but does have goals.  And oh, by the way, Sebastian is a witch.  No big surprise for Lily; after all, she’s a wizard.

Sherrer has changed up the traditional definitions of witches and wizards.  Forget about gender defining a man as a wizard and a woman as a witch.  In this world, wizards are those with inborn abilities to manipulate magic.  Wizardry can be passed on through heredity, but it is not guaranteed.  The genetic lottery may give one child of a wizard those same powers, while another might end up an ordinary, non-magical variety of human.  Witches, on the other hand, are born as ordinary humans and have to negotiate with spirits, pixies, and other fae creatures in order to receive gifts of powers for short-term use.

The previous archives manager, Madam Barrington, is a wizard.  She cultivated Lily for the position, and taught her much about the wizarding world.  Madam Barrington also happens to be Sebastian’s great-aunt, although she most strongly disapproves of the shenanigans that he gets himself into time after time.  Some people simply cannot be trusted, as far as she is concerned.

Sebastian has taken on a job involving a malignant spell and he has gotten himself into trouble.  He needs Lily to help him out, but before they know it, events have spiraled out of control and they are caught in a repeating time loop.  Will they ever escape?  Will they do so in time to save lives, including their own?

This first in series book was an enjoyable read: light, not too complicated, with likeable characters and a promising set up for future entries.  The other titles include Revelations, Allies, Legends, and Betrayal.  Not to judge a book by the cover, but Sir Edgar Allan Kipling, Lily’s fluffy black and white tuxedo cat, graces the front of every entry in the series.  Books, a cat, throw in a little magic?  Sounds like a formula for success
Posted by BPL Ref at 10:26 AM