My Brother Michael by Mary Stewart 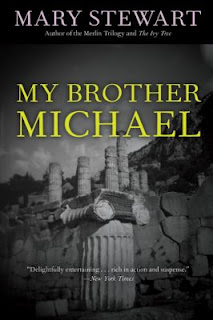 Camilla Haven, a young Englishwoman, is taking a long anticipated vacation in Greece when a man approaches her about a car she has hired “for Simon” in Delphi. The problem is that she hasn’t hired a car, but the man drops the keys on the table and disappears before she can explain his mistake. Camilla had just been lamenting in a letter to a friend that she wanted to see Delphi but was running low on funds, so she decides to take the car to Delphi in hopes she can locate this Simon and perhaps do some sight-seeing in the bargain.  The only Simon she finds is also English, and a man on a mission.  His older brother Michael was killed in Greece during the war and he has come to find from Michael’s Greek friends the place where his brother died. It soon becomes apparent that while the war may be over, there are those who still have scores to settle.

Mary Stewart was one of the pioneers in the romantic suspense genre during the 1950s. As a long time mystery fan, I was ashamed to say that I had not read any of Mary Stewart’s work except for her Arthurian novels.  I set out to remedy that oversight, albeit with some trepidation.  Would the books seem hopelessly dated?

I found that her reputation as an author of romantic suspense is well deserved.  The romance is strong while understated —more attraction than action—but she keeps the balance between the two aspects, romance and suspense. The suspense builds slowly, but there are some breathtaking scenes that actually had me holding my breath. The fact that Stewart can create so much tension with so little carnage was a welcome surprise; and proof, if anyone needed it, that gory descriptions aren’t necessary to make a thriller.

Stewart's novels tended to feature modern thinking, intelligent, and brave young women who were able to take care of themselves in a crisis. They didn’t seek out trouble but held their nerve when trouble found them.  Her characters would be perfectly at home in any novel written today, and would be a good bit more level-headed and less neurotic than most.

Another of Stewart’s hallmarks is her ability to evoke an exotic locale, and My Brother Michael is an excellent example.  She describes the bustle of the streets, the sounds and smells of the market, the wild landscapes, and the ruins in vivid detail, and it all serves to enhance rather than bog down the story.  Even though the book was written some sixty years ago, the story is still vibrant; the details that fix the time period (WW II is only a few years in the past, there is much unapologetic smoking and drinking) don’t date the story for modern audiences. Any geopolitical details aren’t specific enough to make the plot seem archaic.

One thing I loved is that several of the characters have had a classical British education: they can quote from the Greek playwrights and philosophers, discuss architecture and poetry, and take note of the natural world, naming flowers and trees.  They can also drive cars really fast and hold their own in a fight, so don’t think it’s all Homer and heliotropes.

I still have several of her books to read, including what is arguably her best known suspense book, The Moon-spinners.  I’m looking forward to them!
Posted by BPL Ref at 10:01 AM