The Leftovers by Tom Perotta 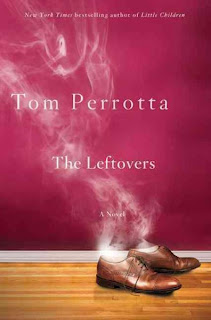 Reviewed by Nancy
It was the cover of “The Leftovers,” by Tom Perotta that enticed me to open the book and read the blurb on the inside, and reading the blurb made me feel pretty sure that I wanted to read the book.The cover features a pair of men’s shoes, empty, with mist or steam or smoke drifting up from inside them. This was enough to arouse a great curiosity in me.


The plot revolves around a rapture-like event that occurred three years before the action in the book starts. During this event, which came to be known as the "Sudden Departure," millions of people all over the world disappeared in the same instant. Christian believers who did not disappear with the millions who did disappear were troubled and perplexed by this. This event was also confusing in terms of Biblical theology, since many of the people who disappeared were not Christian. Muslims, Hindus, Buddhists, alcoholics, Eskimos, homosexuals, Mormons, you name it: the disappearance just seemed to be a random harvest as far as anyone who was left could tell.
In the aftermath of this bizarre and confusing occurrence many people attempted to return to normal, while others were so bewildered and forlorn that this was impossible.


Kevin Garvey, newly elected mayor of Mapleton, is among the group who feel that everyone should get back in gear and get on with their lives. Unfortunately, others members of his family can’t seem to do this. His wife, Laurie, tries to carry on, but after a time leaves home to join a group called “The Guilty Remnant.”

Members of the G.R., as it comes to be known, take a vow of silence, wear all white all the time, smoke cigarettes constantly, and travel in pairs, stalking non-G.R. individuals and staring at them to the point of total discomfort. The in-your-face silent treatment is rooted in the G.R.’s belief that nothing will ever be normal again, and it is their duty to wake up people who think things will be.


Kevin’s daughter, Jill, comes a little unmoored after her mother joins the G.R. She shaves her head, stops going to school, and undertakes casual sex with her peers. Her friend, Aimee, equally as directionless as Jill, moves in with Jill and her father in order to escape her overly friendly step-father.


A few months after the Sudden Departure Kevin’s son, Tom, dropped out of community college to become a devotee of a newly risen cult figure known as Holy Wayne. Holy Wayne, sincere at the outset, eventually allows the fame and power to go to his head, claiming his right to have seven teenage brides as well as the wife he had before he became Holy Wayne. Eventually the authorities catch up with Holy Wayne and in the end he pleads guilty to various unspecified charges and gets twenty years in prison.


This leaves Tom at loose ends. He undertakes a hitchhiking trek across the United States, accompanied by one of Holy Wayne’s pregnant teenage brides. During this adventure Tom and Christine, the “bride,” pose as “Barefoot People.”


Barefoot People, guess what! They refuse to wear any footwear other than flip flops. They are unshaven, unwashed, and unconcerned about anything except where the party is. They seem to be the hippies of the era, seeing the Sudden Departure as a great excuse to drop out and party. (I think if I were embroiled in this plot I would be much more likely to join the Barefoot People than the Guilty Remnant.)


I could go on and on, but I won’t.  You get the picture. This book is kooky, fun to read, but even more fun to tell people about. And don’t worry. I have not told you so much about the plot that you will be bored reading it. There are still plenty of surprises, and even until the last page you will not, nay, not simply until the last page, but until the last paragraph you will not know how things are going to turn out.
Posted by BPL Ref at 9:32 AM