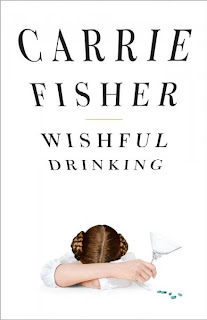 In Wishful Drinking Carrie Fisher tells some really wild tales. She assures the reader, however, that even though many of the stories she’s telling are “way over the top,” she is leaving out plenty that are even farther past “way over the top.” This makes me want to sit down and have a conversation with her just to see if I could get her to tell me some of the parts she left out.
Carrie Fisher is the daughter of Eddie Fisher (famous crooner) and Debbie Reynolds (iconic actress). As Ms. Fisher puts it, her parents were “the Brad Pitt and Jennifer Anniston of the late 50s." And like Brad and Jen, they did not stay married.
So, here’s what happened: Eddie and Debbie were close, close friends with Mike Todd and Elizabeth Taylor. About a year after Mike Todd married Elizabeth Taylor, he was killed in a plane crash.
Carrie Fisher’s father, Eddie, flew to Elizabeth Taylor’s side to console her, “gradually making his way slowly to her front.” In short order Eddie’s involvement with Elizabeth Taylor made his marriage to Debbie Reynolds “awkward.” Divorce followed. Ms. Fisher makes this simple for the reader to grasp by offering these instructions, “think of Eddie as Brad Pitt and Debbie as Jennifer Aniston and Elizabeth as Angelina Jolie. Ms. Fisher provides us with a chart (including pictures) of her parent’s marriages, divorces and children.
Of course, there are two ways to approach this. One can be horrified at the sad shenanigans of the rich and famous, or one can turn it into some really dark humor and laugh it off as Carrie Fisher does. I must say I have enjoyed Ms. Fisher's approach.
If you can't quite place Carrie Fisher, think of the young woman in the movie "Star Wars" who had the funny hair. Ms. Fisher offers a few comments on the hair style in her book.  She also opines that the star wars movie gave her an identity that will follow her to her grave "like a vague, exotic smell."
Ms. Fisher's book is chock full of tasty informational tidbits. I especially savored the one regarding a special talent of former president George W. Bush that is revealed on pages twenty-one and twenty-two.
You might not expect a philosophical observation about immortality to have a punch line, but Ms. Fisher's does. It is put forth in the last two paragraphs of page twenty-two.
Come to think of it, page twenty which covers the period long ago when she dated Senator Chris Dodd is pretty interesting, too.
If you think you don't have any time to fritter away reading a celebrity memoir, just drop by the library and read pages twenty-one and twenty-two. I would hate for you to miss them. Of course, you'll probably get hooked and want to read the book in its entirety.
Posted by BPL Ref at 4:49 PM