Christmas Traditons: The Night Before Christmas

For many families, part of the Christmas celebration includes a reading of the poem “A Visit from St. Nicholas,” or as it’s more popularly known, “The Night Before Christmas.”  There are dozens of versions available, done by a wide variety of artists.  Some are more naturalistic
While others are bit more whimsical.
So popular is this poem that it has spawned a host of imitations.  There’s a Cajun version in which St. Nick’s sleigh is pulled by alligators while in the hillbilly version, it’s drawn by bears. There’s an African American version, a Texas version, an Irish version and many more.  There are even versions that employ familiar characters, such as Sesame Street’s Elmo or Mercer Mayer’s Little Critter.
Needless to say, there are also video adaptations that expand on the poem, including one which tells the story of how Clement Clark Moore, known as a dour classics professor and theologian, came to write light verse for children. This brings up a recent controversy:  did Moore really write the poem? Or was it the work of another?  In one chapter of  Author Unknown:  On the Trail of Anonymous, Don Foster makes the case for another author.  Foster is a professor at Vassar whose work has included identifying a previously unknown poem by Shakespeare and testifying in the Unabomber case. His evidence on “The Night Before Christmas,” while circumstantial, is pretty convincing and makes for fascinating reading.  The part that really won me over had to do with the names of the reindeer.  Have you ever wondered why all the reindeer have names that really mean something except for two?  If you buy into Foster's explanation, then the name DO mean something.  Don't take my word for it:  read the chapter and decide for yourself.  Plus there are other fascinating mysteries in the book-- including one that involves a murder. 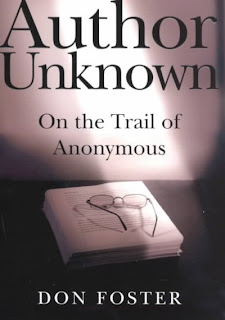 No matter who wrote the original or what version you prefer, “The Night Before Christmas” is definitely a holiday staple. You could say it's the poetic counterpart to Charles Dickens' A Christmas Carol.
Posted by BPL Ref at 9:32 AM