Every holiday has its traditions.  Some are unique to a particular community, like the Easter Egg fights at Peters Hollow, while others, like the Macy’s Thanksgiving Day Parade, are national.  Families have their own traditions as well, so this year we thought we’d list some of the staff’s favorite holiday traditions.   Feel free to join with your favorite book, video, recipe, event or memory! This one is from Jeanne: 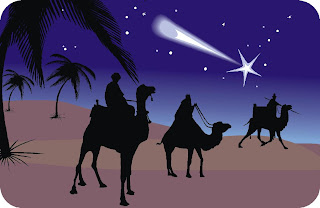 “Amahl and the Night Visitors”
Some traditions fall by the wayside.  When I was a child, my mother always looked forward to the then-annual showing of “Amahl.”  This was, believe it or not, an opera that was run in prime time on a national network.  No, my mother was not an opera aficionado—her musical tastes ran more to Big Band and folk, and as far as I know she never watched or listened to another opera in her life—but there was something about “Amahl” that she dearly loved.  For those unfamiliar with the opera, it’s the story of the lame boy Amahl and his impoverished mother who meet the Wise Men on their way to Bethlehem.  Italian composer Gian Carlo Menotti wrote the opera as a commission from NBC and it was first televised as a live performance in 1951. (It was also the debut of another tradition:  it was the first production of the Hallmark Hall of Fame.) The program was performed live for over a decade, then in 1963 it was taped and rerun until 1966. Of course, this is all from hindsight and Wikipedia.  At the time we weren't keeping track.

I do have a hazy memory of my mother’s disappointment when “Amahl” didn’t come on one year.  At first she thought we must have just missed it, but several years went by without a sign of it. This is a time before DVDs, even before VCRs, when there were few channels and holiday specials were just that:  they were only shown at the holidays and were special. If you missed “A Charlie Brown Christmas,” then you had to wait until next year and hope it was shown again. Still, on any occasion in which someone asked about a box, Mom would chant, “This is my box, this is my box, I never travel without my box” as Kaspar sings in “Amahl.”
Some seven or eight years ago I found a copy on video and bought it. My first surprise was to find out that it was an opera.  I thought it was just a musical, like "West Side Story" which I knew not from the theaters but from ""NBC Monday Night at the Movies." This video was from a later version—from the 1970s, I think—but it was pretty much as I remembered.   The biggest difference is that it was in color. My mother was delighted!  On Christmas Eve, she insisted that we all sit down and watch “Amahl.”  My older brother seemed vaguely puzzled at first, and then all at once he remembered it too.  If I’d remembered more about it, I would have had tissues at the ready.
Even if you don't like opera, give "Amahl" a try if you come across a copy.  If you're curious there are excerpts of various performances on youtube. There’s a book adaptation in the Children’s Department in the fiction section under Menotti.
Just keep some tissues handy.
Posted by BPL Ref at 9:57 AM